Financial markets were overwhelmed with the global onset of the COVID-19 virus as the first quarter progressed. Through mid-February, the markets had mistakenly looked the other way under the impression that the problem was contained. Just weeks later, government officials began to lock down economies and the first self-inflicted, government-induced recession was at our doorstep.

U.S. stocks had their worst month since October of 2008 and it was the worst quarter for the S&P 500 and Dow indices since 1987. All global equity markets fell sharply in response to the sudden onset of an economic recession that will likely be the sharpest in history. March was the most volatile month ever for the S&P 500 with an average daily percentage change of 4.8%. The S&P declined 12.3% for the month of March and was down 19.6% in the first quarter. The tech-heavy NASDAQ index declined 14% for the quarter, less than other major indices. 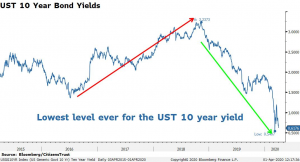 As the U.S. economy began to shut down, the Federal Reserve made two intra-meeting interest rate cuts, dropping the Fed Funds rate back to 25 basis points. It was the first intra-meeting action since the Financial Crisis. We are now back at the zero bound and expect rates to stay low for an extended period of time. The yield on the ten year Treasury bond fell as well, to its lowest level ever. Central banks can and should take action during times of financial stress, which is why they exist. In this case, Chairman Powell acted relatively quickly, both in terms of monetary policy and liquidity programs.

One of the more important functions of the Fed in times of crisis is to provide liquidity to various credit markets. The Fed announced seven different lending and purchasing facilities during the month of March. These programs are all examples of quantitative easing or “QE”. It is expected that the Fed’s balance sheet could expand from $5 trillion to $8-10 trillion over the coming months. The printing press is running full steam ahead. 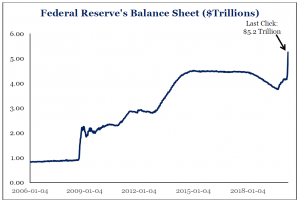 The relatively near term experience of the 2008 Great Recession clearly shortened the Fed’s response time and the level of support that they have announced thus far. During the Financial Crisis, the Fed waited several months before taking any decisive action, but in this case it was a matter of weeks. The spread between the average investment grade bond and the ten-year UST is typically between 80 and 200 basis points. This “spread” gets wider during times of financial stress, and it widened in March. It does not spend much time above 200 basis points (red line) unless the economy is in trouble. It reached 373 basis points on March 23rd, before settling down at the end of the quarter. This is a fancy way of saying that corporate bonds sold off as fear of rising default rates gripped the fixed income market. 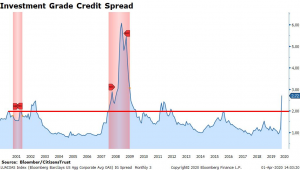 The U.S. is likely already in a recession as is the global economy. With over half of U.S. states and roughly 75% of the U.S. population under “stay at home” orders, this is not a bold statement, it is rather obvious. At this point, the important economic factors are the duration and severity of the shutdown. After a sharp contraction in the first half of 2020, the issue will be how fast the economy can restart itself, when health policy allows businesses to reopen.

Fiscal policy, like monetary policy, has also responded swiftly. Policy makers are responding faster and in larger fashion compared to the Financial Crisis in 2008. The government has already passed three different bills addressing areas negatively affected by the COVID-19 virus. In 2008, Bear Stearns collapsed in March and there was very little fiscal policy response until after the Lehmann Brothers bankruptcy six months later in September. In the past six weeks, the government has passed disaster relief packages that total over 10% of U.S. GDP. This action is multiples larger than the initiatives taken during the last crisis. The $2.2 trillion CARES Act which was passed during the last week of March, was the largest spending bill ever approved by Congress. Less than a week after that bill was signed, rumblings of a fourth package involving infrastructure emerged. Congress is not back in session until April 20th, so regardless of future spending packages, the second quarter will be spent getting the dollars made available from the CARES Act into the hands of those that need it the most. The financial system is significantly stronger than it was leading into the last crisis, the government is acting quickly, and indications are that this terrible virus will be met with future effective treatments and ultimately a vaccine.

Any forecast involving the economy or financial markets will be completely dependent upon the transgression of this pandemic, the health policy response, and the length of the economic shutdown. Unfortunately, policy makers are forced to make decisions with incomplete and far from perfect information. This is driving an extreme amount of variance and dispersion in potential outcomes. There has been a constant barrage of bad news since February, continuing into the early days of April. The dramatic restrictions on society and business, although overwhelming now, should begin to yield some incrementally positive news during the second quarter.

Financial markets dislike uncertainty. Uncertainty equates to higher risk, which results in lower multiples for stocks and higher yields demanded for bonds. But financial markets are also forward looking. Enormous amounts of monetary and fiscal relief are being thrust upon an economy that will likely be smaller in size when it is turned back on. This global health crisis came on fast, but it too shall pass. It won’t go away fast enough for any of us, but it will subside and when metrics begin to improve, at the margin, financial markets will respond accordingly.

We look forward to serving you and appreciate the trust you have placed in us. Please reach out to your CitizensTrust representative with any questions you may have.
Learn more about CitizensTrust