Over 60 locations to serve you Learn More 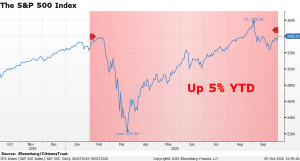 U.S. stocks continued to gain in the third quarter as the economy recovered and many of the worst fears over COVID-19 failed to materialize.  The S&P 500 made its quickest recovery from a bear market in its history.  Volatility continues to be a major theme in 2020.  The S&P 500 had fully reversed its decline by August and hit a new record high of 3,580 in early September.

The S&P 500 gained 8.9% in the third quarter and transitioned into the black for the year, gaining 5.6% YTD.  Equity performance has largely been powered by the technology sector.  Many large technology companies have benefited from the ongoing economic restrictions and social changes in response to the coronavirus.  The technology sector is over 27% of the S&P 500 and has gained 28.6% for the year.  The tech heavy NASDAQ index has also made big gains, up 25.4% through the third quarter.

Interest rates remained stable in the third quarter. The Federal Reserve continues with the message that they have no intention of raising interest rates any time soon. The Fed’s monetary policy has taken a back seat to fiscal policy and their commentary has focused more on inflation and their willingness to let it run hot. 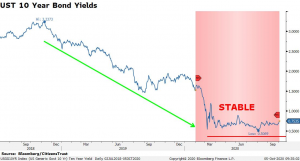 The Fed continues to target a 2% core inflation rate despite missing this target for most of the past decade.  They now refer to 2% as an “average” and are willing to tolerate levels above this in order to achieve their target.  This will be difficult to achieve with significant slack in economic output for the foreseeable future.  Most economists do not see a full recovery in jobs or economic output until late 2022.

There has certainly been some tremendous economic progress over the course of the past few months. The sheer magnitude and speed of the fiscal and monetary response from the Federal government has injected some momentum into the early stages of the current economic recovery. However, like any off-setting stimulus, the effects are ultimately temporary and eventually the economy will have to stand on its own. In the meantime, the government is currently debating another stimulus package. Economic restrictions across the U.S. have been more severe and longer in duration than many expected. Additional fiscal aid will likely be necessary to keep the economic momentum going and the progress on such a package will be a focal point for investors in the near term. 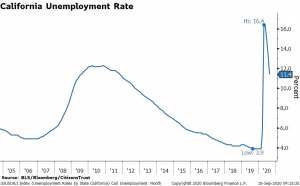 Control over economic progress has dramatically shifted away from market forces and toward the policies of state governments. Health policies and economic restrictions have changed rapidly in response to various coronavirus pandemic metrics. Here in California, cautious policy changes have slowed the reopening process and it has begun to show up in economic measures. California’s unemployment rate has declined from a peak of 16.4% to 11.4%. The U.S. unemployment rate is currently 7.9%. With roughly 12% of the country’s population, California’s initial unemployment claims have consistently been running at more than 25% of total U.S. claims as job creation has dramatically lagged the rest of the U.S. for the past several weeks.

Job growth will continue to be the most important economic measure. The U.S. has recovered roughly half of the 22 million jobs lost as a result of the pandemic and ensuing economic shutdown. Further progress will come at a slower pace as some industries, such as hospitality and leisure, have been disproportionately affected by the shutdown and changes in social policies. Despite the challenges in California, the recovery in employment metrics should continue and will be aided by temporary employment as we enter the holiday season. 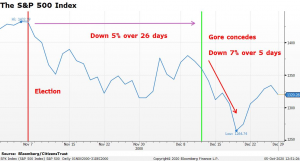 In less than four short weeks, the Presidential election will be behind us and hopefully the uncertainty that comes with it will be behind us as well. In recent investor surveys, the number one concern has been the potential for a contested election and a drawn out legal battle in the coming months. When this happened in the 2000 Presidential election, equity markets sold off during the process, but it was not a disaster. Over the 26 trading days from the election until the Supreme Court ruled on December 13th, the S&P 500 fell 5%. In fact, the performance was worse in days after the ruling, but keep in mind the unwinding of the tech-bubble back then was just gaining steam. The entire drawdown over this period was 12%, again suggesting the market does not like uncertainty.

While 2020 has been a volatile and frustrating year in many ways, the remainder of the year will likely remove a significant amount of uncertainty. The election will pass, the virus will continue to run its course, vaccines will be developed, the economy will continue to recover, and perspective will be gained. Investors will soon be able to better assess what policies will likely be in place in the coming quarters and will adjust accordingly.

We look forward to serving you and appreciate the trust you have placed in us. Please reach out to your CitizensTrust representative with any questions you may have.
Learn more about CitizensTrust