Volatility returned with a vengeance in the first quarter of 2022. Both stock and bond markets fell sharply during the quarter. While stocks managed to recover significantly, bond prices remained under pressure due to rising rates. 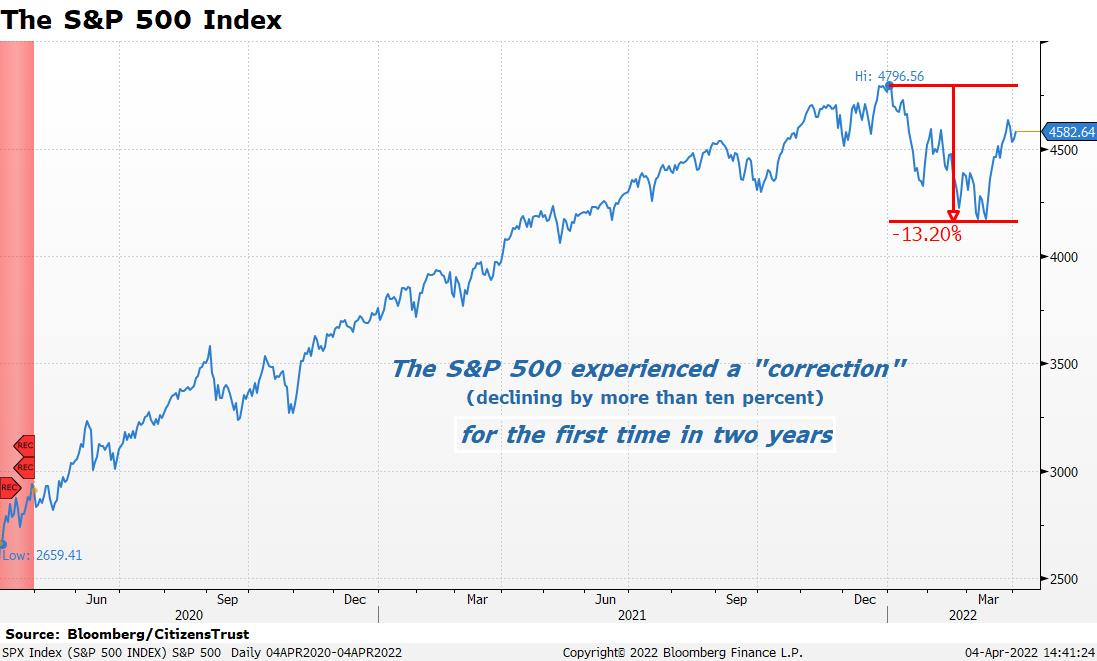 The S&P 500 Index experienced its first correction of more than ten percent since the first quarter of 2020 and the initial COVID-19 outbreak. After beginning the year near record levels, the index declined more than 13% at the lowest levels of February and then recovered to finish the quarter down roughly five percent. The combination of a pivoting Federal Reserve and the Russian invasion of Ukraine drove volatility up and equity prices down throughout the world. The tech-heavy NASDAQ Composite was down roughly nine percent during the quarter. On a relative basis, the S&P 500 outperformed broader U.S. indices and many international markets.

Outside the U.S., International Developed markets, as measured by the EFA ETF, declined 6.5% during the quarter as sanctions against Russia sent many European markets into turmoil. Emerging markets, as measured by the EEM ETF, were down 7.6% for the quarter. Emerging market indices continued to be negatively impacted by the significant weighting of Chinese equities and then the invasion of Ukraine drove the U.S. dollar higher which negatively affected emerging market equities. Globally, the MSCI World Index lost 5.7% during the first quarter.

Interest rates rose sharply during the first quarter driving bond prices downward. The Bloomberg U.S. Aggregate Bond Index, which measures the entire U.S. bond market, declined 5.9%. It was the worst quarter for bonds since 1980. Longer-term rates, as measured by the ten-year U.S. Treasury bond, are now well above their pre-pandemic levels. 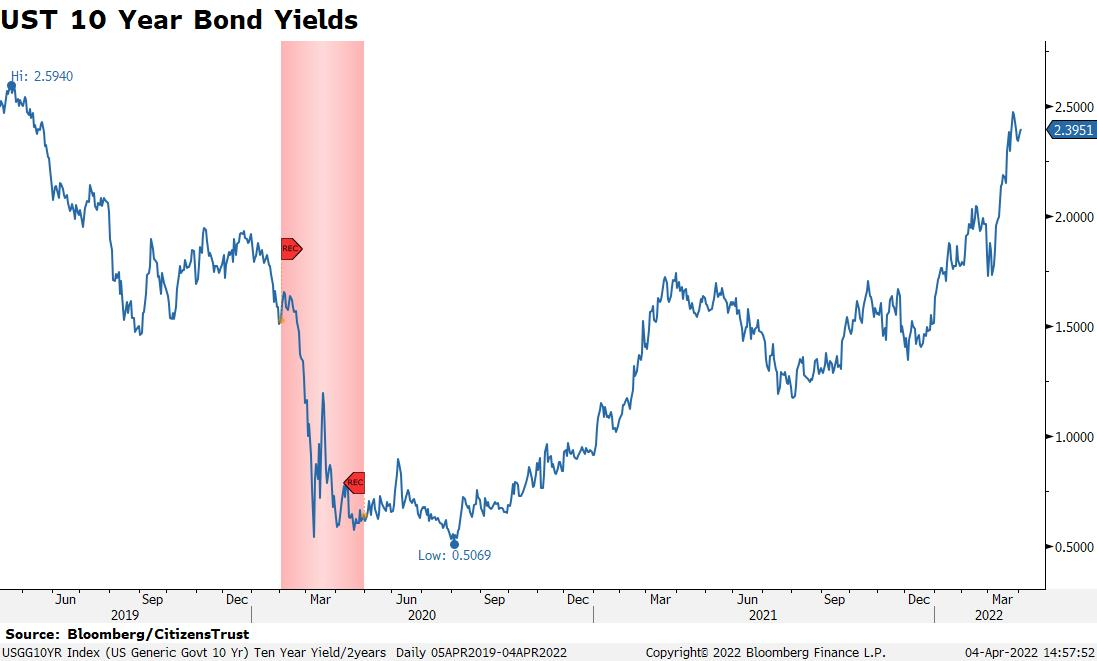 Also moving sharply higher, above pre-pandemic levels, were shorter-term rates. The two-year UST jumped a whopping 163 basis points since the beginning of the year and has risen from nearly zero a year ago to roughly 2.5%. This broad step up in rates over the past few months has been in reaction to the “Powell Pivot” that began in December. Fed Chairman Powell was quick to get rid of the word “transitory” in the Fed’s description of elevated inflation rates. Soon thereafter, as high inflation readings persisted throughout the first quarter, the Fed continued to talk up rate hikes and the pace at which they would occur. At the end of last year, the fixed income futures market expected three rate hikes by the end of 2022, beginning in May. Just three months later, after a 25-basis-point hike in March, the market expects nearly ten more rate hikes and the Fed Funds rate to be near 2.75% by February 1, 2023 – just 10 months from now. 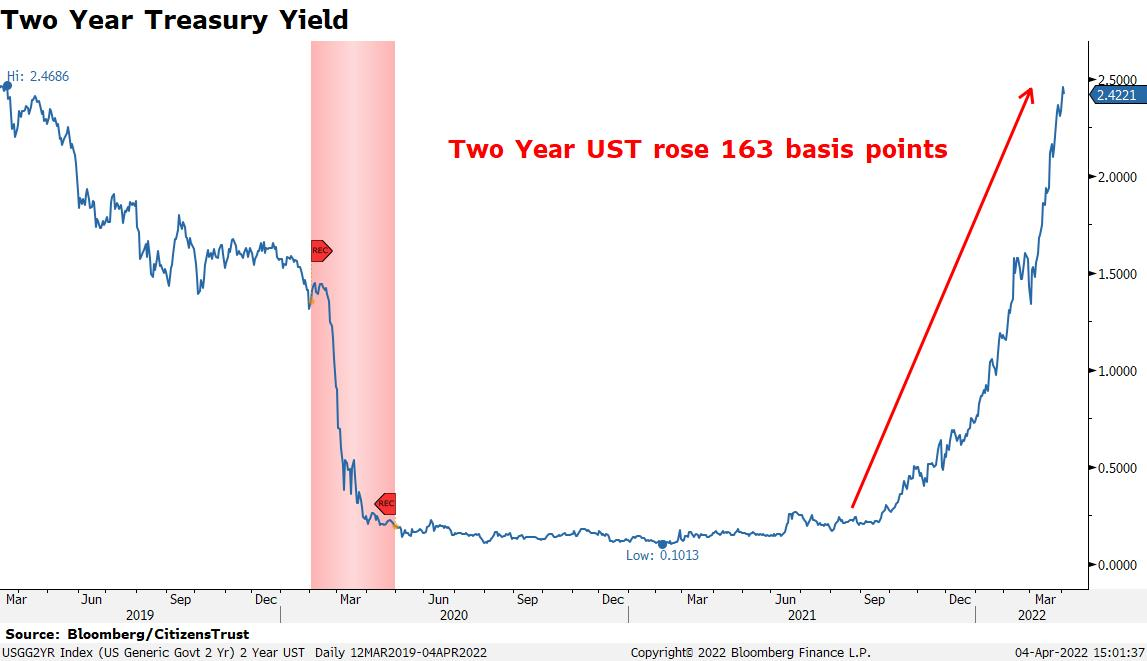 This is a remarkable change in tone from the Fed and is primarily due to the highest inflation readings in 40 years. Yet inflation is the symptom, not the cause. Trillions of dollars of money printing in response to COVID-19, quantitative easing, stimulus checks, and extensive supply chain disruptions across the globe have all played a factor. Regardless of the cause, price stability is the number one mandate of the Fed and inflation now has their attention. Higher interest rates are expected in the coming months.

Economic growth in the U.S. remains above trend as the economy recovers from COVID-related restrictions. The outlook for 2022 remains strong with current consensus estimates for GDP growth of 3.4%, well above recent long-term trend levels. However, a stronger economy will push the Fed to remove monetary accommodation at a faster pace. In other words, they are taking the proverbial punch bowl away. Higher rates will take time to manifest their way into more restrictive investment and spending decisions. It is likely that broad economic drivers such as consumer spending, housing, and automobile sales will remain strong in the months to come due to pent-up demand and strong job growth. This is good news and will give the Fed some leeway in navigating a “soft landing” in the form of a mid-cycle slowdown. 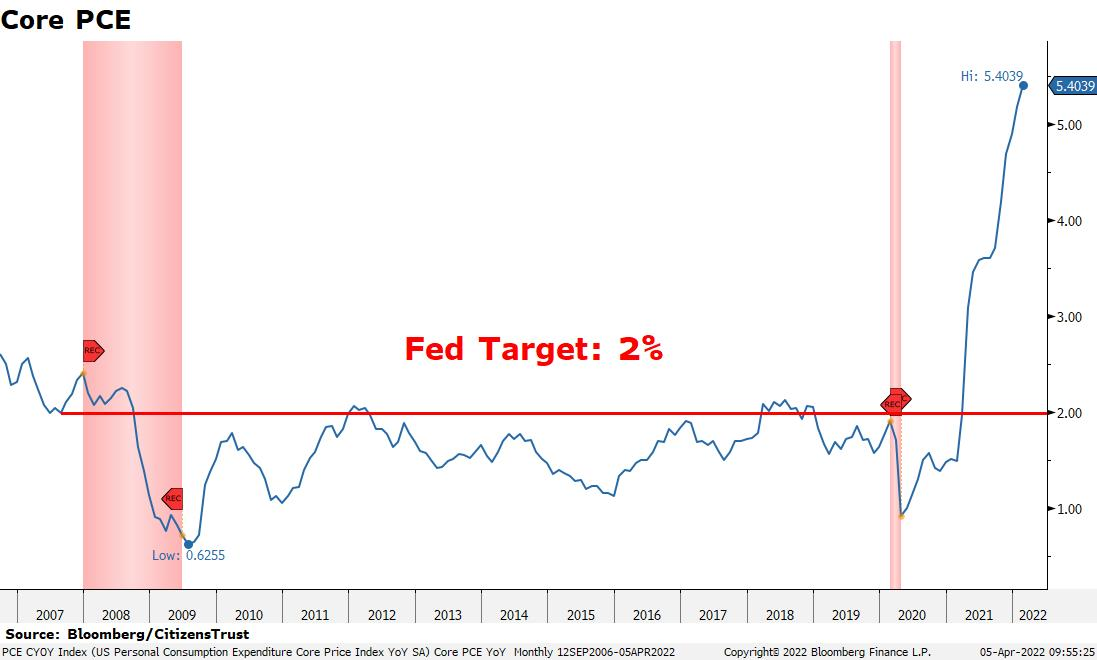 The recent geopolitical events in Europe have added another complicating factor to inflation trends due to the impact on food and energy prices. While it is difficult to gauge the duration of these market disruptions, the effect on many resource-dependent countries will be negative. Europe faces many issues which will hurt growth, but the U.S. is not immune. Domestically there has been an increase in energy costs and other commodities such as fertilizer. Rising input prices will support higher inflation readings in the near term.

The Fed’s preferred measure of inflation is Core PCE, or Personal Consumption Expenditures. Fed messaging had been that they would let that measure run above their target of 2% for “some time,” but now PCE is well above their target. There is no doubt that this has their attention and that they will do what it takes to drive this measure down.

One unintended consequence of the government’s COVID-19 policies was an extremely dislocated labor market which continues to persist today. There are more job openings than there are unemployed people, leading to a very tight labor market and ensuing wage inflation. Fortunately, the Fed could possibly benefit from this condition as they embark on an accelerated rate-hiking campaign. Recessions have not occurred in the past without labor market weakness, and there is a long way to go before job growth turns negative. Job growth has been strong, unemployment claims are at record lows, and continuing unemployment claims are falling. The unemployment rate is at 3.6%, also near record lows. These conditions should attract workers and support a recovering labor force participation rate in the face of rising rates.

The U.S. economy was held back in the first quarter due to the new COVID “omicron variant” holding back consumer spending, and on-going supply chain issues. Economic growth should accelerate in the second quarter and perhaps though the summer as most COVID-19 restrictions have been removed recently. Strong economic growth and a tight labor market will give the Fed a green light to hike rates at a faster pace than previously expected. The next two Fed meetings in May and June are currently expected to result in 50-basis-point rate hikes at each meeting.

Financial markets will be focused on future inflation readings and any leading indicators that inflationary pressures are either easing or increasing. Markets have been volatile as they adjust to this new Fed paradigm and the swift change in messaging. The Fed now realizes that they are behind the curve and they are willing to do something about it.