Financial markets recovered some of the year-to-date losses in the fourth quarter of 2022. Both equities and bonds rose during the quarter as the Federal Reserve began to slow its pace of rate hikes and inflation measures declined. 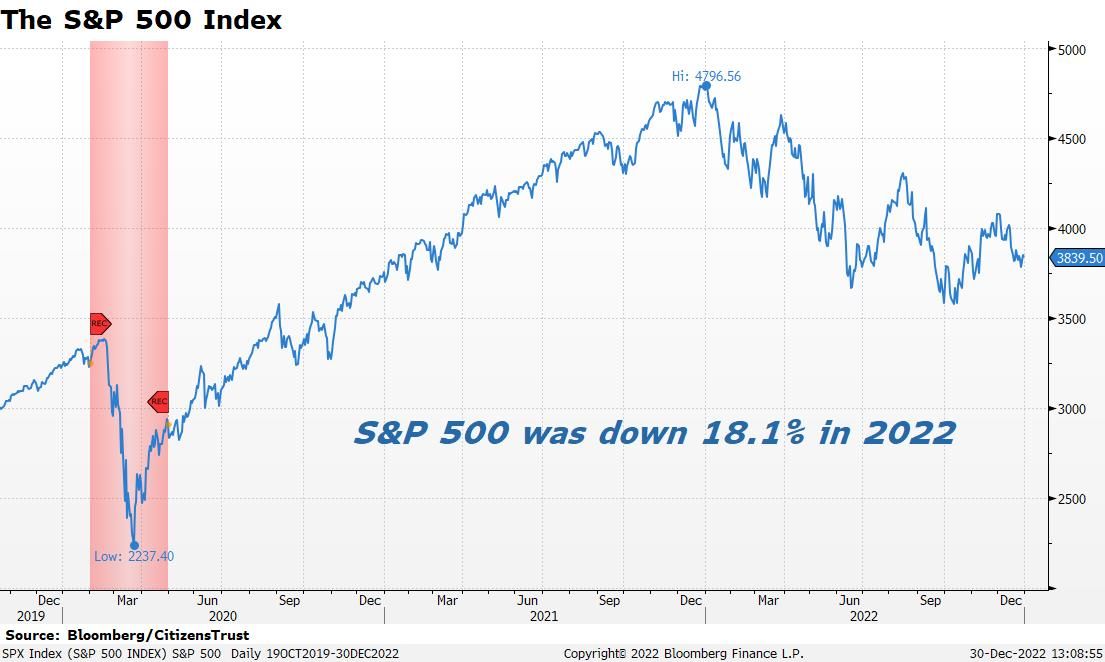 The NASDAQ Composite led the market lower throughout 2022 as technology stocks continued to give up some of their pandemic-related gains. NASDAQ was down .8% in the fourth quarter and was near its low of the year in late December. The 32.5% decline in NASDAQ in 2022 was its worst return since dropping 40% in 2008. 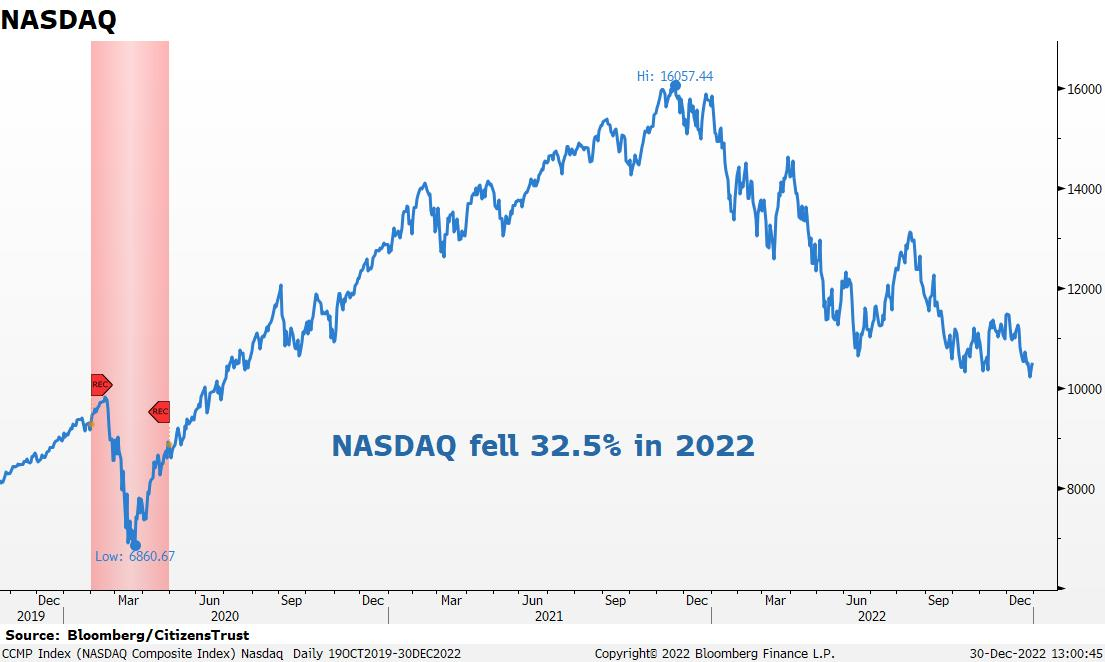 Outside the U.S., International Developed markets, as measured by the EFA ETF, rose 17.7% during the quarter and were down 14.4% in 2022. The Ukrainian conflict continued to weigh on European economies and drive energy prices higher across Europe. Emerging markets, as measured by the EEM ETF, were up 10.3% for the quarter bringing their 2022 losses to 20.6%. Globally, the MSCI World Index gained 9.9% during the fourth quarter and finished the year down 18.4%, just slightly worse than the S&P 500.

Bond markets were hit hard in 2022 as the Fed raised interest rates at the fastest pace in over 40 years. The year began with the Fed Funds target rate near zero at twenty-five basis points and a loud and clear message from the Fed that rates would stay “lower for longer.” Several months of rapidly increasing inflation readings abruptly changed the messaging from the Fed to “whatever it takes” to get inflation back down, meaning significantly higher interest rates. The Fed continued to hike rates at both of their meetings in the fourth quarter and the Fed Funds rate finished the year at 4.5%. This dramatic change in policy resulted in the worst year for the bond market in nearly 50 years. The Bloomberg Aggregate Bond Index, which measures the U.S. bond market, fell 13% in 2022. 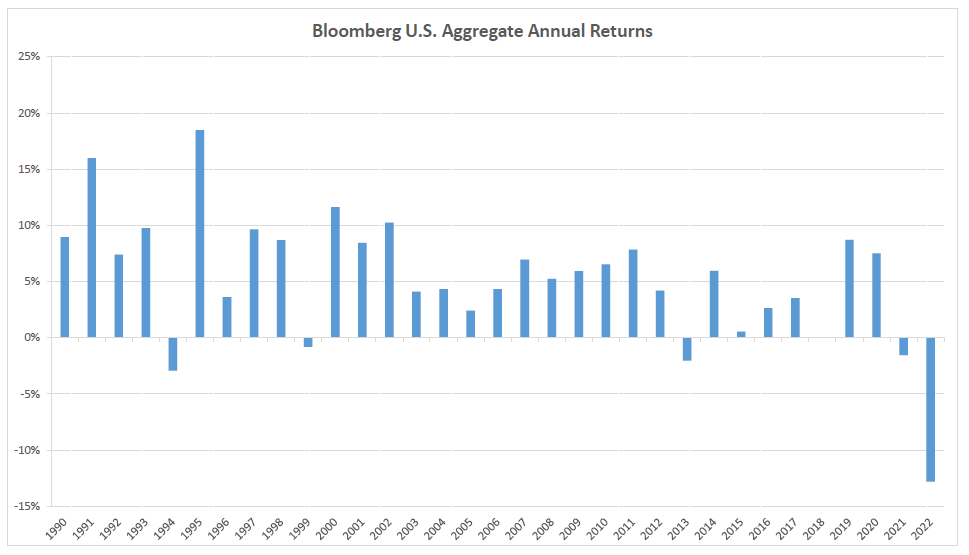 Chairman Powell now talks about the Fed’s intent to keep rates “higher for longer” to tackle persistently high inflation readings. This is ironically 180 degrees from the “lower for longer” messaging a year ago. Interestingly, despite a 125 basis point increase in the Fed Funds rate during the quarter, the two-year U.S. Treasury yield peaked in early November and is roughly where it was in October. This is a signal that the bond market believes this rate hike campaign is nearing its end. The two-year bond yield remains near the highest levels seen since 2007 and we would expect the Fed to complete this rate hike cycle in the first quarter of this year.

Growth in the U.S. economy saw a mild rebound during the second half of the year, which should bring the annual GDP growth rate to an estimated 1.9%. As the economy comes off its post-pandemic sugar high, it will likely continue to slow in 2023 as last year’s rate hikes begin to take effect. Slow economic growth combined with high inflation is the definition of stagflation and those conditions are likely to be met for several quarters. The sharp rise in rates will put downward pressure on consumer demand in the coming months, which should ease inflationary pressures over the course of 2023. 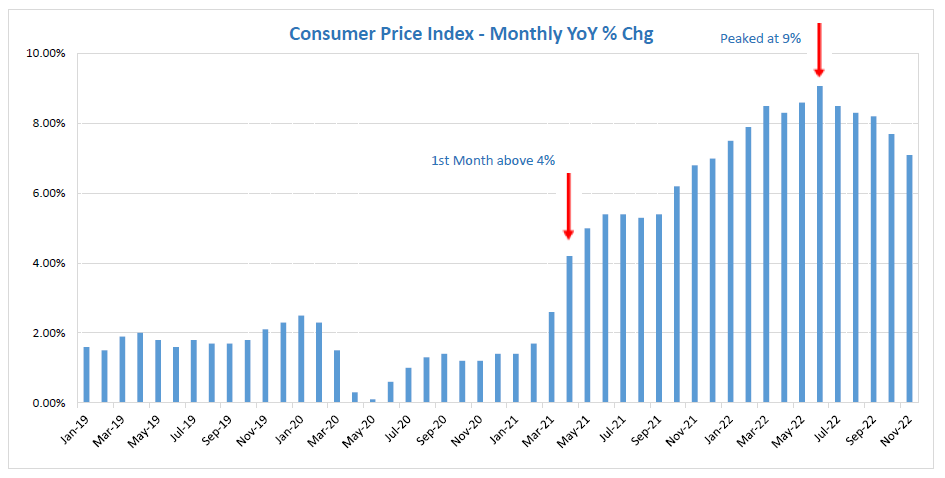 Overseas, the ongoing conflict in Ukraine has caused an economic slowdown and an energy crisis in Europe. The sanctions on Russia have disrupted global energy supply chains but have not deterred Russia’s aggression. GDP growth in Europe is projected to slow to just .5% in 2023, teetering on a recession. In Asia, China recently dropped their “zero COVID” policy allowing markets and industries to reopen. This should help economic growth recover throughout the region from relatively low levels. Historically, economic declines in Europe or Asia have not been significant enough to drag the U.S. into a recession, simply due to the size of the U.S. economy. However, a slowdown in the U.S. does have an out-sized effect on the rest of the world so all eyes remain on U.S. economic trends.

While 2022 saw the highest inflation rates in 40 years, it appears inflation peaked last summer. The Consumer Price Index, which is a broad measure of inflation, will likely fall throughout the first half of the year from its peak last June. This will be necessary for the Fed to put its current hiking campaign on pause. The market currently expects one more hike of 25 basis points at its February meeting and then a pause. Currently, the Fed is projecting a message of “higher for longer” in order to wrangle the inflation rate back down toward its 2% target. The consequences of the 450 basis point rate increase in 2022 are just beginning to be felt and leading inflation inputs are already trending in the right direction. The Fed has stated that they would like to see a softening of the labor market in order to be convinced that the coming decline in inflation is permanent. What that means is that the Fed is going to create job losses and projects that the unemployment rate will rise over the course of 2023. This will remove wage pressure from the economy, which is one of the stickiest components of inflation. 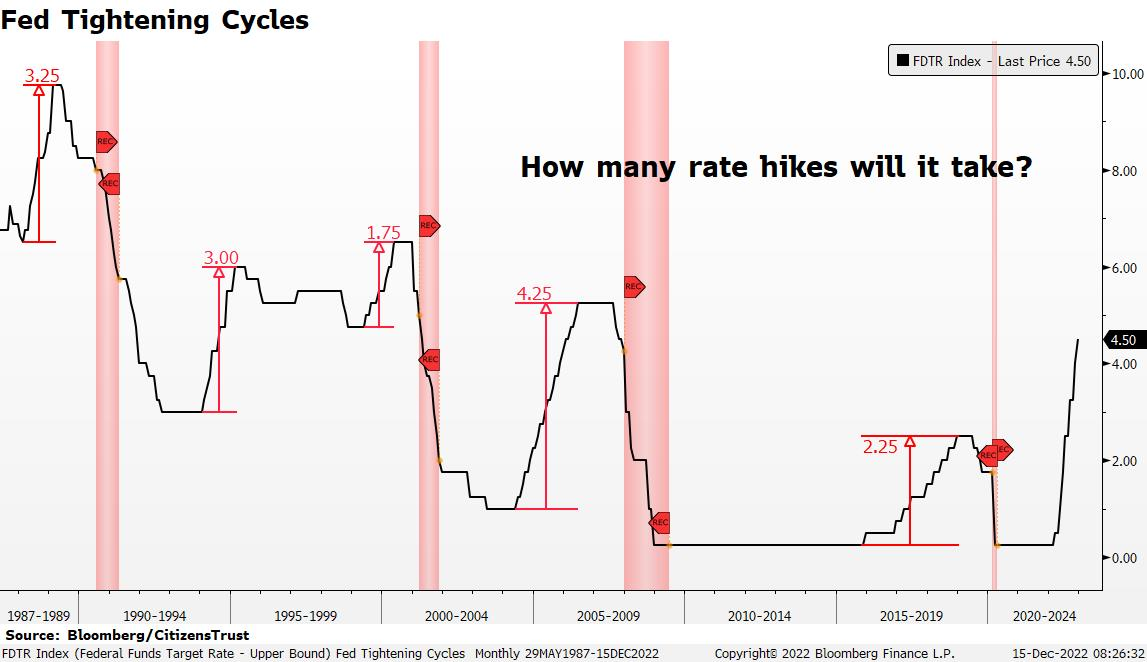 For signs that the Fed has gone far enough, investors will be focused on future inflation readings and any increases in weekly unemployment claims. A significant rise in unemployment claims will precede a rising unemployment rate. Interest rate increases of 400 basis points in the past have been more than enough to slow the economy and, in most cases, cause a recession.

During market sell-offs it is important to remember that financial markets are forward looking and will recover swiftly at the first sign of an inflection point in growth or a Fed policy change. Just as equities led the economy on the way down, they will lead on the way back up after the economy weans itself off of easy monetary policy. The S&P 500 has only seen consecutive years of negative returns on three occasions since 1957. Volatility is likely to remain high and we expect opportunities to arise as the market adjusts to this higher rate environment