Financial markets performed poorly in the first half of 2022. Faced with high levels of inflation, a tightening Fed, and slowing economic growth, both stock and bond markets fell sharply in the second quarter. 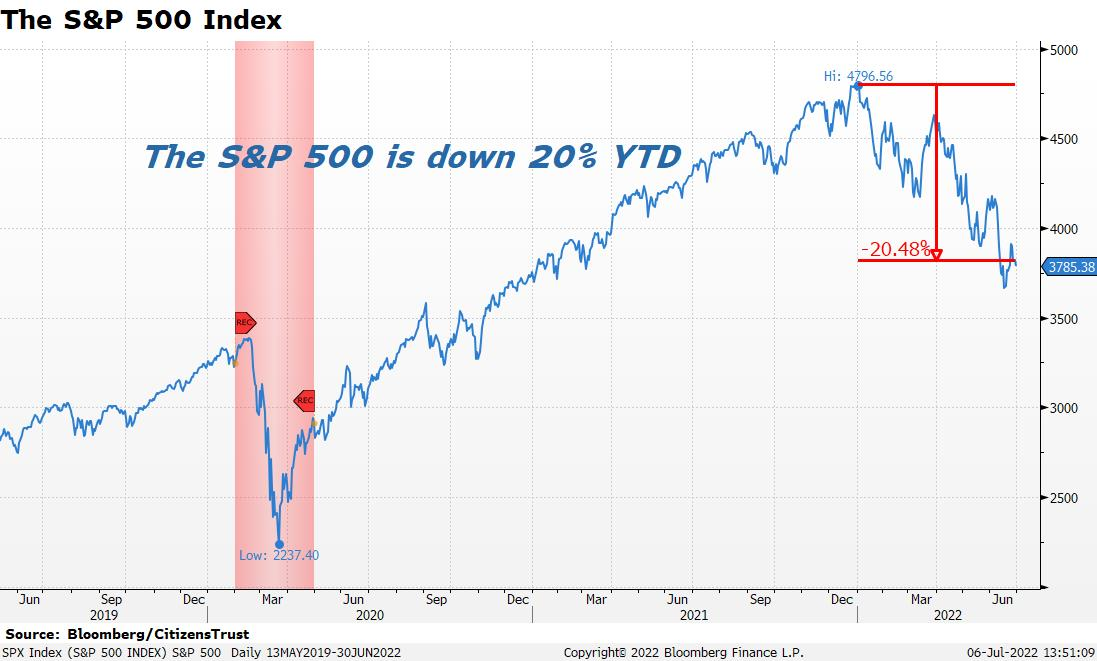 The S&P 500 Index fell into bear market territory in mid-June after accelerating inflation measures drove expectations for future interest rate increases higher. The S&P 500 dropped 16.1% in the second quarter and is down roughly 20% YTD. This is the worst first-half performance since 1970. 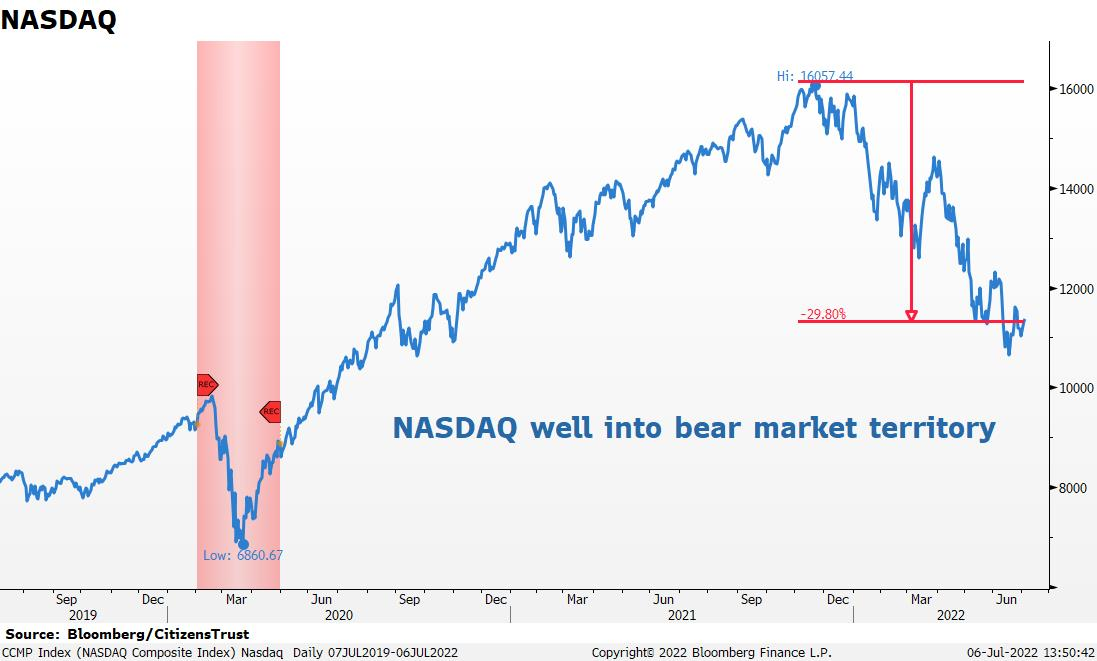 The tech-heavy NASDAQ Composite was a market leader during the COVID-19 recovery, out-performing the S&P 500. Many technology companies benefited from COVID policies and saw a boost to their growth rates. Those benefits are unwinding now and NASDAQ has led the market decline with a 30% drop from its highest point last November.

Outside the U.S., International Developed markets, as measured by the EFA ETF, declined 13.2% during the quarter as sanctions against Russia increased concerns of a European recession. The International Developed ETF is down 18.8% YTD. Emerging markets, as measured by the EEM ETF, were down 10.4% for the quarter and are down 17.2% year-to-date. Globally, the MSCI World Index lost 15.2% during the first quarter and is down 19.9% YTD.

Interest rates doubled during the first half of the year, with the ten-year U.S. Treasury rising from 1.5% to over 3.0%, pushing bond prices downward. The Bloomberg U.S. Aggregate Bond Index, which measures the entire U.S. bond market, declined 10.2%, the worst start to a year for bonds in over 40 years. Longer-term rates, as measured by the ten-year U.S. Treasury bond, are now well above their pre-pandemic levels. 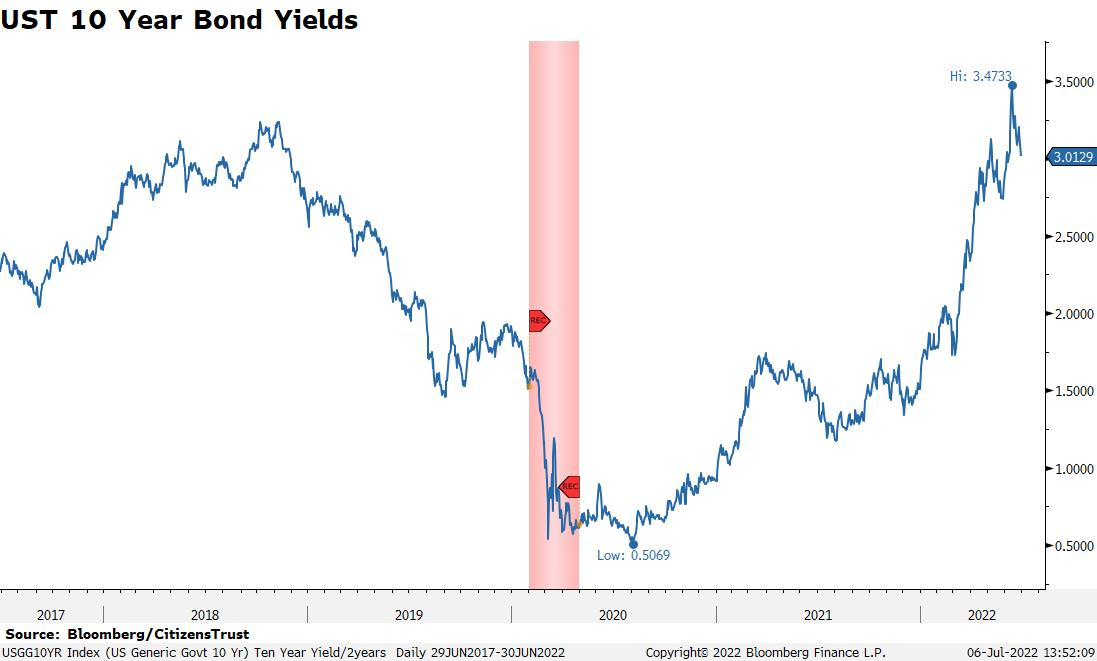 The sharp move higher in interest rates accelerated in June when the May CPI Inflation measure reported above expectations. The headline CPI inflation rate of 8.6% moved the Fed from an expected 50 basis point rate hike to a 75 basis point rate hike at their June 15th meeting. The Fed Funds Rate now stands at 1.75% and is expected to move higher over the rest of the year. The Fed meets again on July 27th and another increase of 50 or 75 basis points is expected. One determining factor will be the next CPI reading for June which will carry a lot of weight toward the Fed’s next move. At the end of last year, the fixed income futures market expected just three rate hikes by the end of 2022. The Fed has said that they intend to get the Fed Funds rate above “neutral” to around 3-3.5% in the next six months and they believe they can achieve that level without causing a recession.

However, economic growth in the U.S. is slowing. The second quarter was supposed to experience a rebound from the Omicron-plagued first quarter that contracted -1.6%. Estimates for second quarter GDP growth began above 3% and have fallen sharply as economic measures have underperformed expectations. The Atlanta Fed’s GDPNow estimate has fallen over the course of the last month and now sits at negative 2.1%. This estimate will change frequently before the official number is reported in late July, but the trend has been sharply negative as several leading economic indicators have turned down. The combination of rising rates and rampant inflation has begun to take a toll on consumers. The highest gasoline prices ever and the inflation of food prices that we have not experienced since the ‘70s have constrained household budgets. Credit card spending in the past few months has risen above pre-COVID levels.

The invasion of Ukraine has disrupted the recovery in Europe and added to global inflation trends due to the impact on food and energy prices. It is difficult to gauge the duration of this conflict, but after six months it does not look like an end is on the horizon. The sanctions on Russia have played havoc with global energy markets and the destruction of Ukraine’s economy has spiked food prices in other parts of the world. Higher food and energy prices are out of the Fed’s control and will make it more challenging to bring inflation back down to two percent, which is their stated goal. The above concerns are exactly why markets performed so poorly in the first half. Both Europe and the U.S. are likely to experience an economic recession in the coming months and financial markets are now in the process of pricing in those expectations. 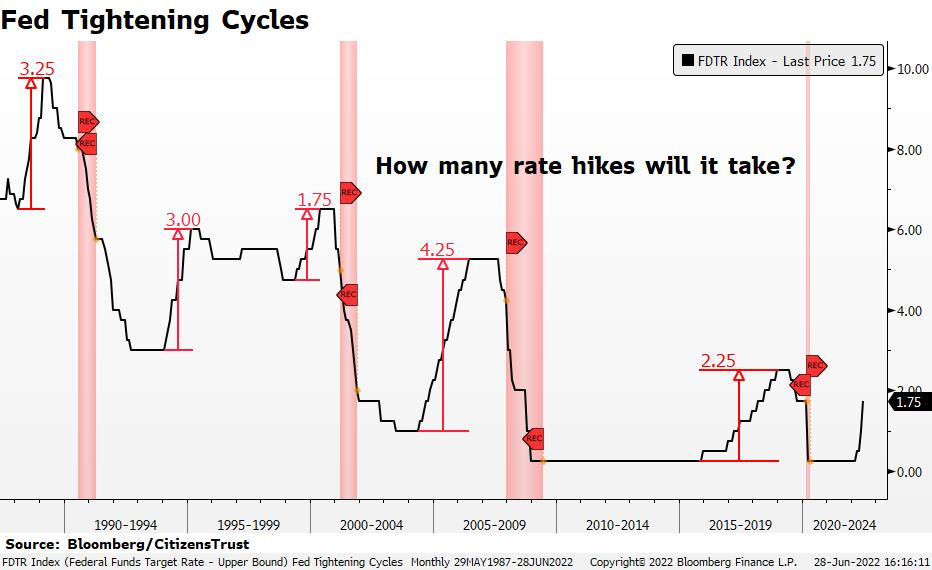 The Federal Reserve has one priority now and that is to get inflation trending down. They have explicitly said that price stability (i.e. less inflation) is a bigger priority than economic growth. Future inflation readings will dictate the pace at which the Fed will raise rates and a slowing economy will ultimately remove some inflationary pressures. There are two Fed meetings in the third quarter and the market currently expects rates to increase by an additional 1.25% by the end of the third quarter. Investors will be focused on signs that the Fed has gone far enough, stifled demand, and that peak inflation is behind us. The market already anticipates that the Fed will be cutting rates by the end of 2023.

During market sell-offs it is important to remember that financial markets are forward looking and will recover swiftly at the first sign of an inflection point in growth or a Fed pause. Just as equities led the economy on the way down, they will lead on the way back up. The S&P 500 has typically bottomed about six months after the start of a recession and has made significant gains long before it is obvious that the economy is growing strongly again.