Financial markets continued their decline in the third quarter of 2022. Both equities and bonds fell as the Federal Reserve renewed its commitment to fight inflation with the quickest pace of rate hikes in over 40 years. 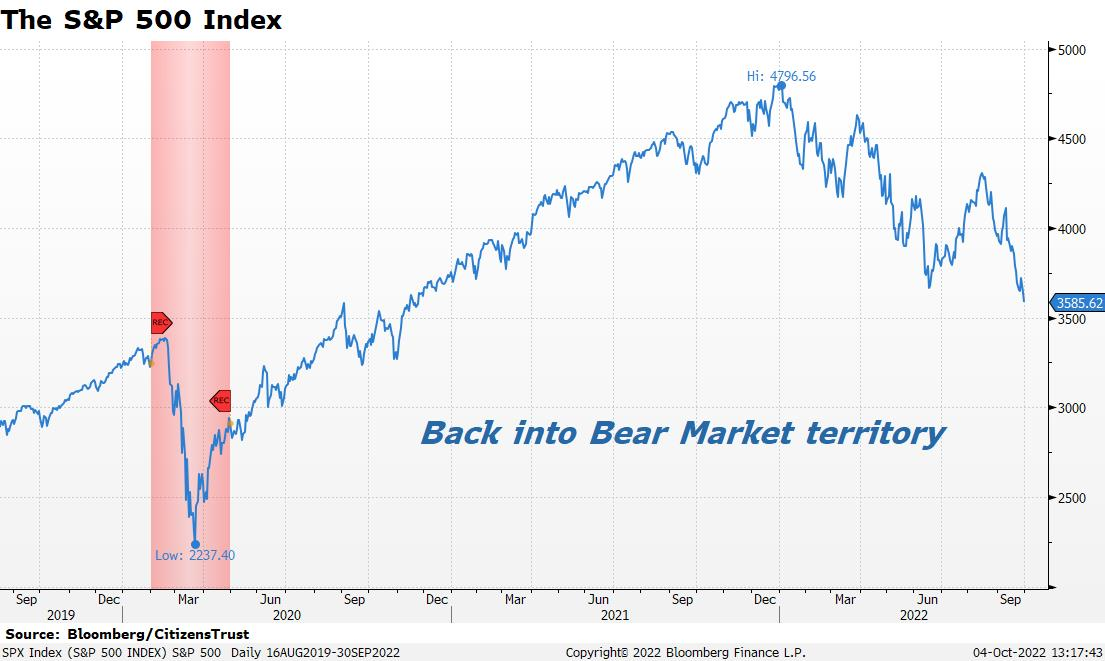 After a sharp rally during the summer, the S&P 500 Index fell back into bear market territory at the end of the third quarter. Stubbornly high inflation readings have forced the Fed to restrict monetary policy in an attempt to slow the economy. The S&P 500 dropped 4.9% in the third quarter and is down roughly 23.9% YTD.

The tech-heavy NASDAQ Composite continues to lead the market as it has over the past several years. NASDAQ was down 3.9% in the quarter, also near its lowest point of the year. It has led the market decline with a 32% drop this year. 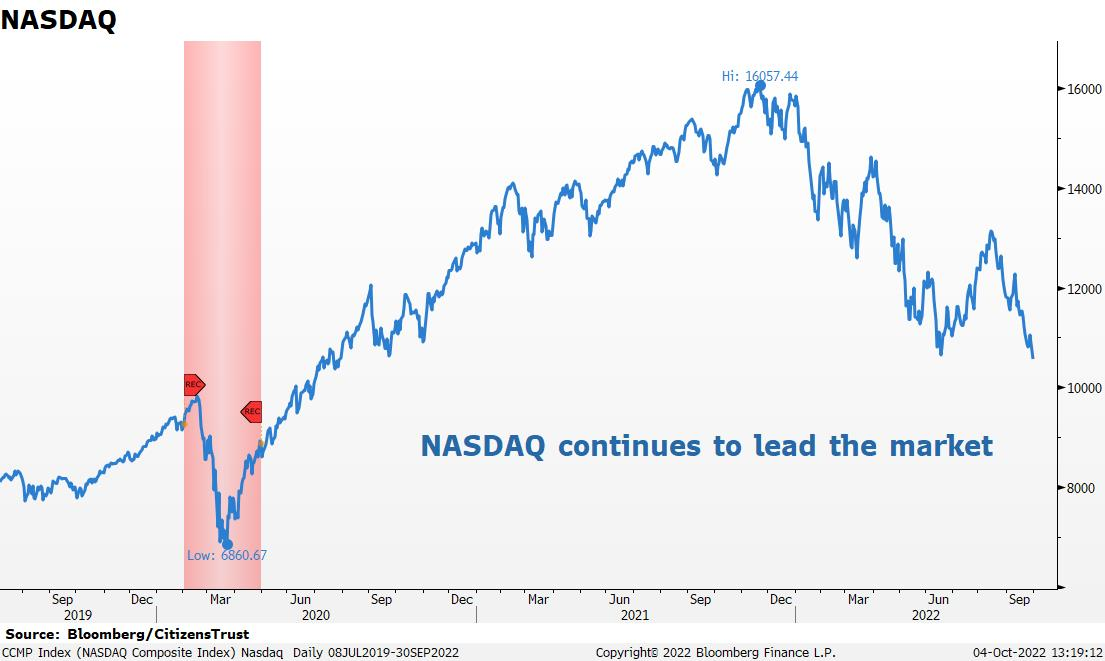 Mid-cap stocks, as measured by the Russell Mid-Cap ETF, were down 3.4% for the quarter and are down 24.3% YTD. Small-cap stocks, as measured by the Russell 2000 Small-Cap ETF, fell 2.1%, and are down 25.1% YTD. This quarter’s relative outperformance by small and mid-cap companies was largely due to the remarkably strong U.S. dollar which has a negative effect on large-cap companies with significant revenues overseas.

Outside the U.S., International Developed markets, as measured by the EFA ETF, declined 10.4% during the quarter and are down 27.2% YTD. The invasion of Ukraine, Russian sanctions, and ensuing European energy crisis have materially weighed on European economies. Emerging markets, as measured by the EEM ETF, were down 13.0% for the quarter and are down 28.0% YTD. Globally, the MSCI World Index lost 7.2% during the first quarter and is down 25.7% YTD.

Interest rates rose at a rapid pace over the course of the quarter. The Fed increased the Fed Funds Rate 75 basis points at both of their scheduled meetings in the third quarter. This increased the upper bound of the Fed Funds rate from 1.75% to 3.25%. Chairman Powell made it very clear on a number of occasions that the Fed expects further rate increases and plans to keep rates “higher for longer” to tackle persistently high inflation readings. The Bloomberg U.S. Aggregate Bond Index, which measures the entire U.S. bond market, declined 4.8% during the quarter and is now down 14.6% YTD. This is the worst performance on record for the bond market since tracking began in the 1970s. The two-year U.S. Treasury yield has responded to the Fed’s projections, rising constantly throughout the year to over 4%. This is the highest yield the two-year bond has offered since the summer of 2007. 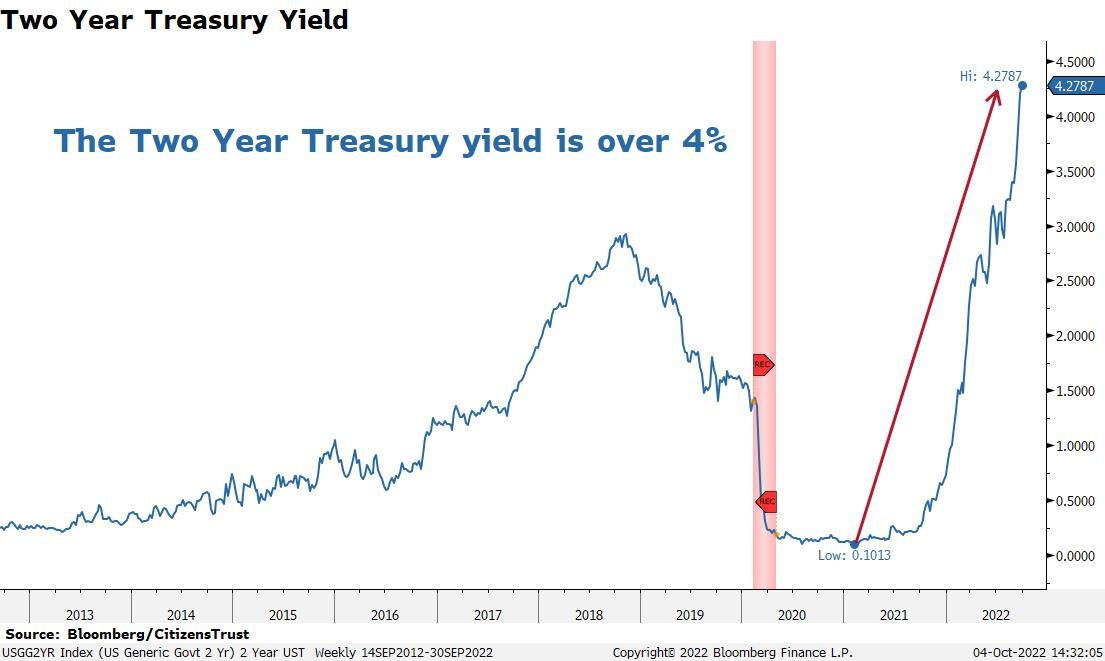 The sharp move higher in interest rates has been driven by higher-than-expected inflation readings from both the Consumer Price Index and the Producer Price Index. The headline CPI inflation rate looks to have peaked at 9.1% in June and has retreated slightly to 8.3%, but remains uncomfortably high for the Fed. As a result, the Fed has increased their targeted Fed Funds rate by 100 basis points at their most recent meeting and it now stands at 4.25 to 4.5%. Inflation clearly has the attention of the Fed, U.S. Consumers, and business owners alike and the Fed’s slow start at raising rates in March of this year is forcing them to move at a faster pace today.

After two quarters in a row of economic contraction, the U.S. economy will likely see a mild rebound during the third quarter. Regardless, the economy in the U.S. is slowing and GDP forecasts for this year and next have been falling all year. Slow economic growth combined with high inflation is the definition of stagflation and those conditions are likely to continue for several quarters. The sharp rise in rates will have an effect on many industries in the coming months which should ease inflationary pressures over the course of 2023. For example, the housing market will slow from record activity levels as mortgage rates have more than doubled over the past year. This will ultimately put downward pressure on home prices as inventory builds. Energy prices are rising again, driving up utility bills and gasoline prices. It is likely that discretionary consumer spending will come under pressure as wage growth slows, interest rates rise, and prices remain high.

Despite our challenges here in the U.S., America remains a bright spot compared to Europe. The ongoing conflict in Ukraine has caused an energy crisis in Europe just as winter approaches. The sanctions on Russia have disrupted global energy markets without producing their intended goals. The U.S. dollar has soared this year to levels not seen in two decades. The dramatic move in the U.S. dollar’s valuation has put additional pressure on many international and emerging economies. Europe and the U.S. are likely to experience an economic recession in the coming quarters and financial markets are in the process of pricing in those expectations now. 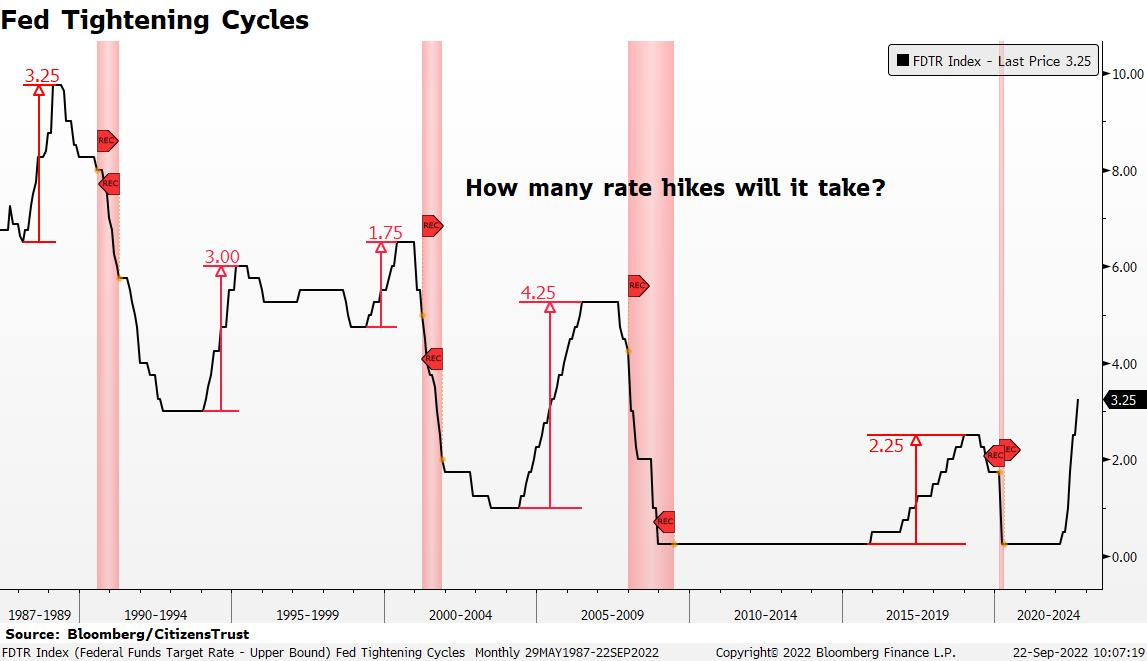 Future inflation readings will dictate the pace at which the Fed will raise rates and the pending economic slowdown will ultimately determine when the Fed pauses this process. Future rate hikes are expected at both of the Fed meetings this quarter, in November and December. Investors will be focused on signs that the Fed has gone far enough, stifled demand, and that peak inflation is behind us. Interest rate increases of 300 to 400 basis points in the past have been more than enough to slow the economy and, in most cases, cause a recession. With both government and consumer debt levels high, we do not expect this cycle to be any different.

A mid-term election will take place this quarter and typically the party in power losses control over some part of Congress. Current polling shows that less than 30% of the country believes that we are “heading in the right direction” and that the typical change in power is likely to occur again. This will result in political gridlock, which is usually celebrated by financial markets since it tends to reduce uncertainty, as a lot less gets done legislatively.

During market sell-offs it is important to remember that financial markets are forward looking and will recover swiftly at the first sign of an inflection point in growth or a Fed policy change. Just as equities led the economy on the way down, they will lead on the way back up after the economy weans itself off of easy monetary policy. The S&P 500 has typically bottomed about six months after the start of a recession and has made significant gains long before it is obvious that the economy is growing strongly again.

We look forward to serving you and appreciate the trust you have placed in us. Please reach out to your CitizensTrust representative with any question you may have.