What a difference a year makes. Equity markets exhibited continued strength in the first quarter as COVID-19 cases fell sharply from an early January peak and the government passed the second largest stimulus bill in our country’s history. 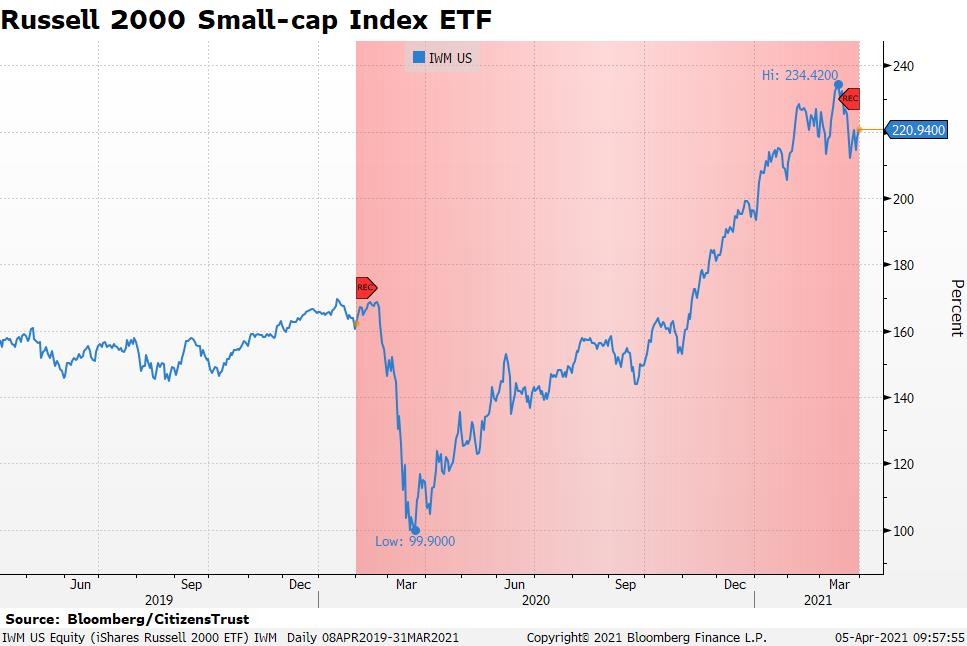 U.S. stocks rose sharply in the first quarter with a 6.2% gain in the S&P 500. The S&P 500 and the Dow Industrial indices both finished the quarter near all-time highs. This was a much better start to a new year in contrast to the sharp sell-off in 2020. Technology actually lagged the S&P 500 with the NASDAQ Composite gaining 3.0%. It was the first quarter since COVID-19 began that technology didn’t lead the market. Equity participation remained broad with both small and mid-cap stocks posting significant gains.

Outside the U.S., International Developed markets, as measured by the EFA ETF, were up 4.0% during the first quarter. Emerging markets, as measured by the EEM ETF, were up 3.2% for the quarter. Both International indices lagged the U.S. as the stimulus response outside of the U.S. was viewed as less than adequate. Globally, the MSCI World Index rose 4.9% in the first quarter, representing a very solid start to the year.

While equity markets performed well, it was the fixed income market that experienced extreme volatility in the first quarter. Interest rates rose sharply and the yield curve steepened significantly. 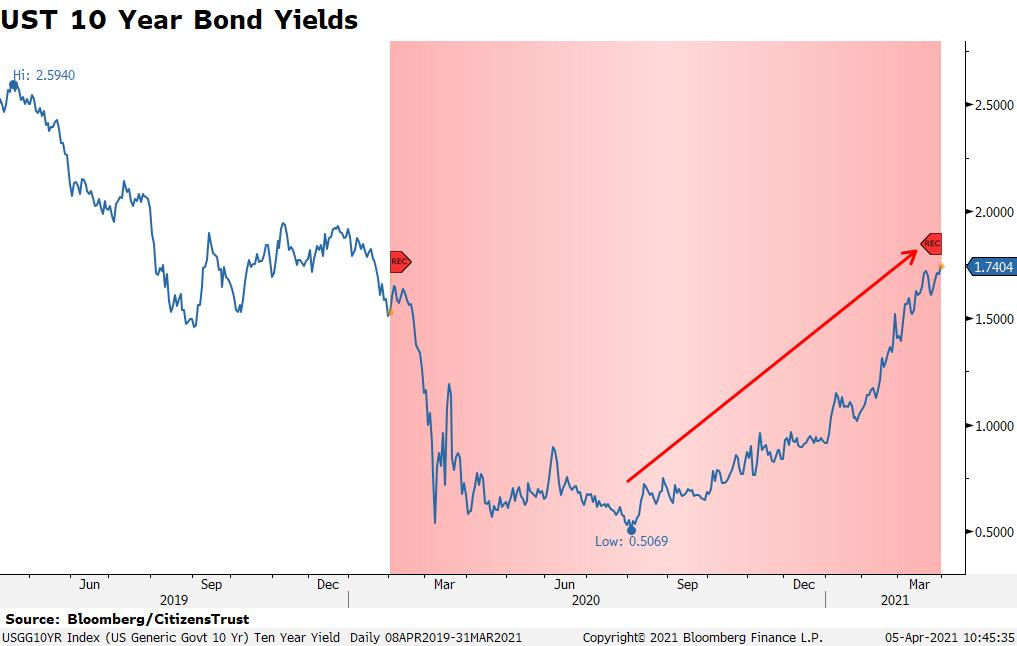 It really should be no surprise that, with COVID-19 receding rapidly and the government passing massive amounts of stimulus, the ten-year Treasury yield should recover to pre-pandemic yields. Granted, the move in rates was swift. The yield on the ten-year Treasury bond was just over 90 basis points to start the year and finished the quarter at 1.74 percent, nearly doubling. Such a sharp rise in rates put significant pressure on longer-term Treasury bond prices. The 30-year bond lost 15.7% during the quarter. This marks the worst quarter on record for
the long bond.

The Federal Reserve continued to state that it has no intention of raising rates this year, but the non-stop government stimulus has put upward pressure on rates across the yield curve. 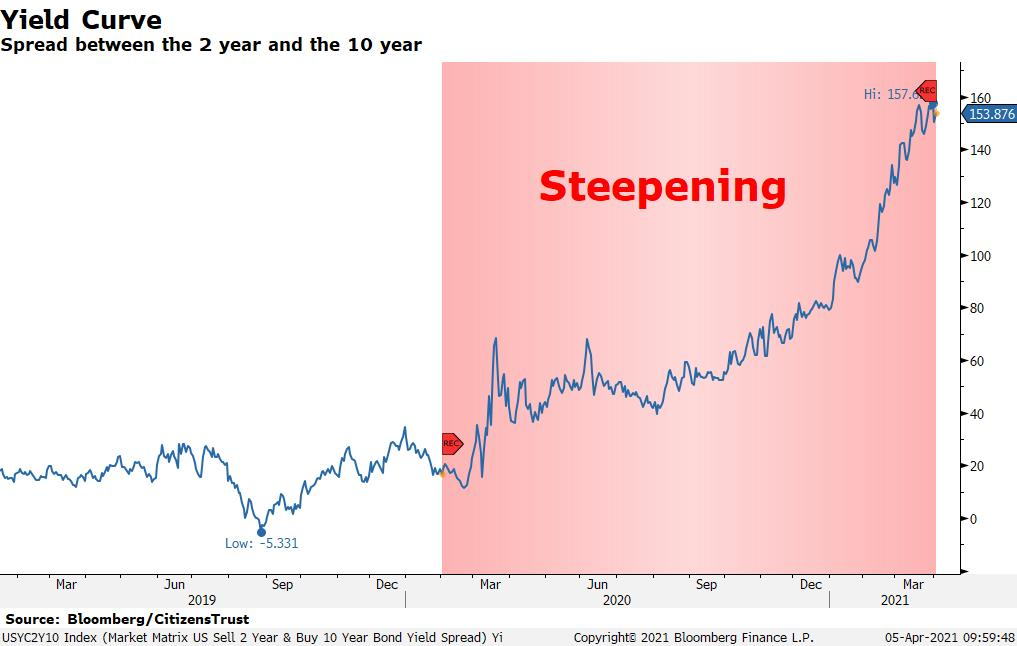 The spread between the two-year and the ten-year treasury bonds reached the widest levels since 2015. This is an indicator that financial markets expect a rapidly accelerating economy in the coming quarters and higher rates in the out years. Essentially, the Fed is only focused on one part of its mandate – maintaining full employment and it will ignore higher inflation this year. The Fed is not expected to raise interest rates until the economy recovers back to full employment levels and inflation is above their 2% target for an extended period of time.

The Fed had continued success in contracting credit spreads as even the high yield market tightened to levels not seen in years. This is another sign that investors are feeling good about offering credit. 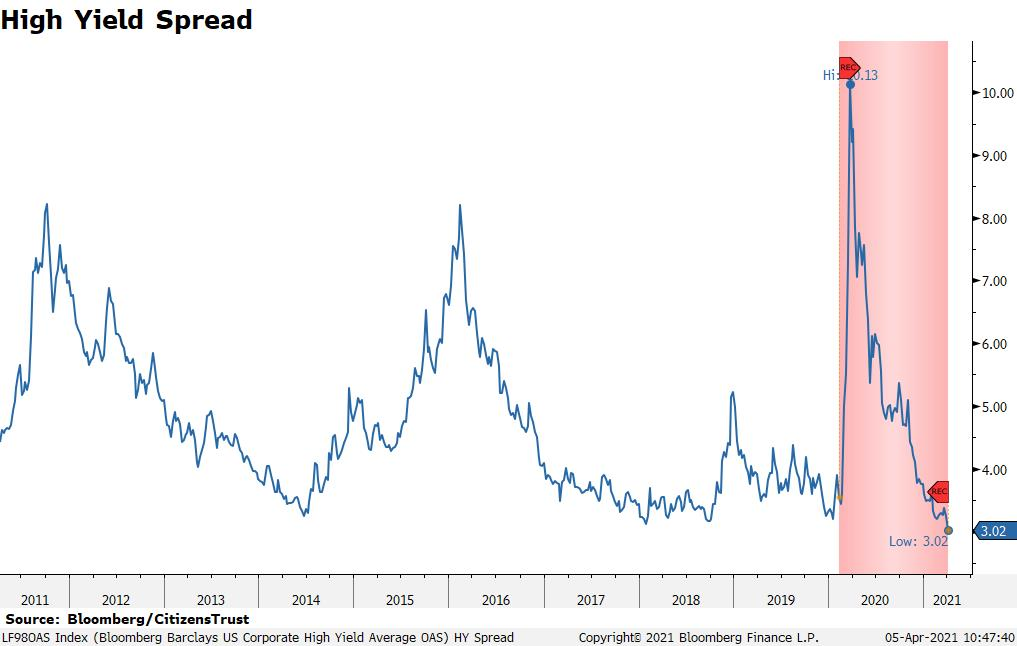 Regardless, the decline in bond prices left almost all fixed income benchmarks slightly in the red for the quarter.

Despite a partially locked down economy and terrible COVID-19 trends in the fourth quarter, the economy still managed to produce 4.0% GDP growth. In response to COVID-19, the government passed a $900 billion stimulus back in December of 2020 and the new Biden Administration passed a $1.9 trillion stimulus package in March. This recent stimulus bill alone amounts to 9% of 2021 GDP. As a result, government spending will again play a larger-than-usual role in our economy this year.

Fortunately, as the first quarter progressed, COVID-19 trends materially improved. They peaked in early January and ended the quarter near the lowest levels of the pandemic. This resulted in many reopening moves by state governments across the country. Vaccination efforts have ramped significantly as well, and the U.S. is now vaccinating roughly 3 million people per day.

The government’s response to COVID-19 has produced some enormous dislocations in economic measures. GDP estimates for the first quarter of 2021 and the calendar year are rising at one of the fastest rates we have seen in decades. Consensus estimates are now over 6% for the year and nearing 10% in first and second quarter due to the stimulus package and pent-up demand from a restrained consumer. 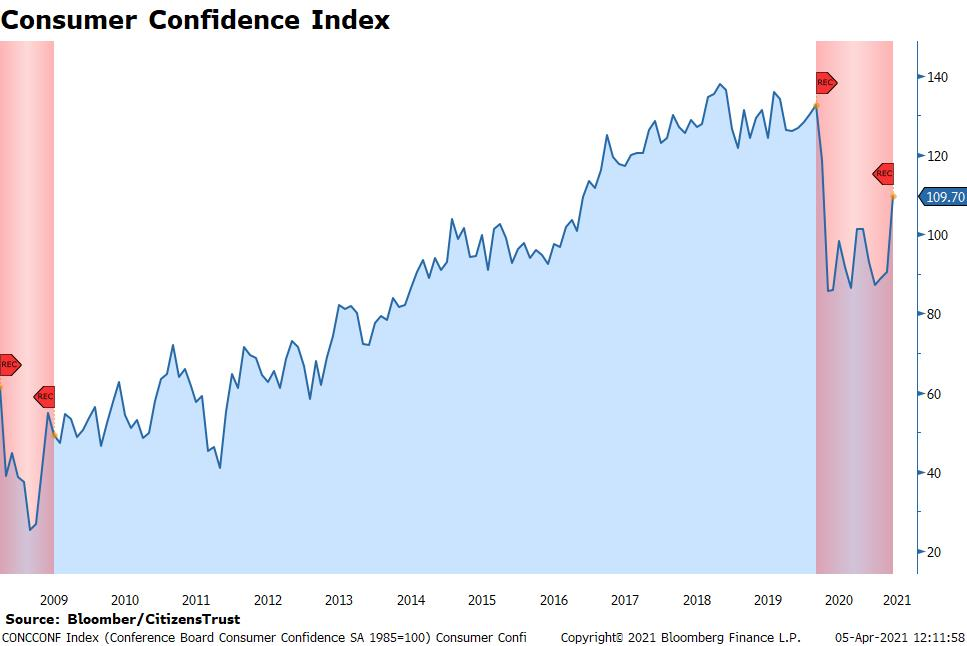 Of the most recent $1.9 trillion stimulus package, over $1 trillion is expected to be spent in the first five months. In addition, despite the massive disruptions COVID-19 caused to the U.S. labor market, the U.S. consumer is in excellent shape overall. Consumer net worth was, remarkably, up 10% in 2020 and is now at an all-time high at $130 trillion. Personal savings is roughly $1.3 trillion greater today than it was a year ago. As the economy reopens, consumer spending is likely to skyrocket. As an early indication, in the month of March, consumer confidence saw its largest month-to-month increase in nearly a decade.

The above trends are filtering their way through earnings estimates for the S&P 500. The first quarter of 2021 marked the fastest pace of increasing earnings estimates during a quarter since FactSet began tracking the data nearly 20 years ago. Easy comparisons to awful 2020 numbers will allow for some fantastic year-over-year growth results but, nevertheless, the U.S. economy could make a return to pre-pandemic output levels in the first half of this year. This is much sooner than expected. For this economic strength to become sustainable, the labor market must follow suit. Unemployment rates need to fall further and millions of jobs need to be “re-created” in order to return to the full unemployment levels of year end 2019. If COVID-19 trends continue to improve and vaccinations put an end to the pandemic, this should be possible in the months ahead.