In the fourth quarter, financial markets continued along similar trends that had been in place throughout the year. Stocks continued to rise putting an exclamation point on what was a great year. Bonds continued to struggle to make gains as ten-year Treasury yields finished right where they began.

The S&P 500 was incredibly consistent in 2021, marching higher throughout the year, and the fourth quarter was no exception. The S&P 500 gained 11% in the quarter and finished the year with a total return of 28.7%. The S&P 500 hit a new high during every calendar month of the year and its biggest drawdown of the year was around 5% in the third quarter.

Outside the U.S., International Developed markets, as measured by the EFA ETF, were up 2.8% during the fourth quarter and finished 2021 with a gain of 11.5%. Emerging markets, as measured by the EEM ETF, were down 1.6% for the quarter and fell 3.6% for the year. Emerging markets lagged global stocks throughout 2021 due to the significant weighting of Chinese equities within emerging markets. Chinese stocks sold off during the year as several new policies initiated by the government were viewed as unfriendly to businesses. Globally, the MSCI World Index gained 7.0% in the fourth quarter and notched another stellar year, rising 18.7% in 2021, largely driven by the strength in U.S. stocks.

Rising interest rates early in 2021 resulted in a difficult year for bond investors. The Bloomberg AGG fell 1.54% in 2021 and the Bloomberg Intermediate AGG fell 1.29%. It was the third-worst year for bond investors in the last 30 years and only the fourth time in the past 30 years that returns were negative. The increase in yield last year was really a setup from the pandemic-induced low levels of 2020, as the rise in yield occurred entirely in the early part of the year.

After much projection by Chairman Powell, the beginning of the end of the Fed’s money printing is here. The Fed had been printing $120 billion each month and using the proceeds to purchase $80 billion in U.S. Treasuries and $40 billion in mortgage-backed securities. The Fed accelerated their taper plans in December and will now slow these purchases by $20 billion and $10 billion respectively each month in 2022. This puts the Fed on pace to be done with this round of “Quantitative Easing” by March of this year. The Fed will then be free to debate the pace at which they intend to raise rates throughout the remainder of 2022. The fixed income market currently expects three rate hikes by the end of the calendar year, beginning in May. This would land the lower bound of the Fed Funds rate at .75% in 12 months. 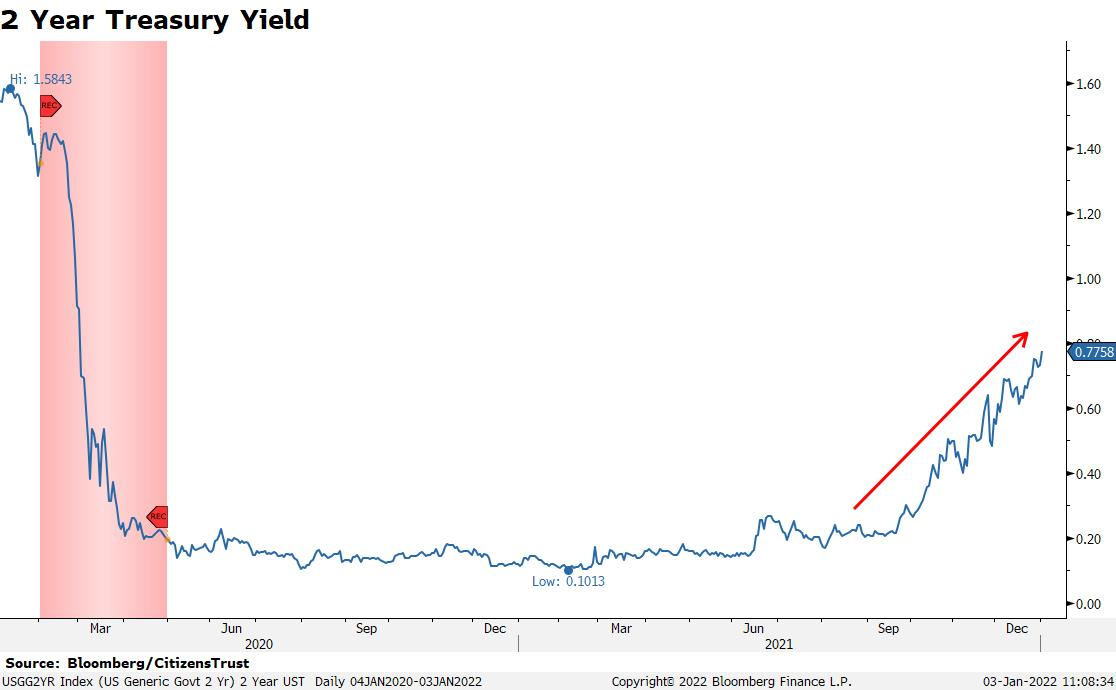 Short-term rates have acknowledged the Fed’s new guidance and the yields on two-year U.S. Treasury bonds continued to rise from 10 basis points to over 70 basis points by the end of the year. Rising short-term rates is welcome news for savers, yet those yields remain well below the early 2020 levels of 1.58%, before the current Fed intervention program began.

Economic growth in the U.S. remains above trend as the economy recovers from COVID-related restrictions. The outlook for 2022 is strong with current consensus estimates for GDP growth of 3.9%, nearly two points above recent long-term trend levels. Near-term economic prospects have been a tug of war between pent-up demand from the constrained economy, supply chain disruptions, and resurging COVID cases this winter. It looks like the fourth quarter ended on a strong note with record-setting holiday sales. However, increasing global restrictions and canceled travel plans due to surging COVID cases are a limiting factor for the beginning of the first quarter of 2022. Demand for goods and services remains high as economic activity and corporate profits have returned to pre-pandemic levels. Government stimulus induced demand, coupled with supply constraints, has pushed inflation back into everyday discussions for the first time in decades. When the economy “reopened” and was met with various supply chain disruptions, increasing inflation readings were thought to be transitory. Several months of record-setting inflation readings have changed that thought dramatically, and inflation now has the attention of the Fed, consumers, and politicians alike. For sure, some impactful measures like used car prices are elevated by temporary factors that will eventually reverse. However, broad inputs such as food and energy prices, which are excluded from Core CPI, still get the most attention from the everyday consumer.

Inflation will remain the most hotly debated economic issue in the New Year. Virtually all inflation measures are at multi-decade high levels, in some cases the highest levels seen in over 50 years. However, inflation measures are presented on a “rate of change” basis, which means that even though prices will likely remain high, the “rate of change” could begin to trend down toward less painful increases by the end of the year.

For far too many quarters, the unfolding prospects for the current quarter are largely dependent upon COVID trends and the government’s response to those trends at both the federal and state levels. With new “omicron variant” cases rapidly rising, further restrictions will temper economic growth and delay labor market improvements. Fortunately, people are adapting to COVID waves and each subsequent wave appears less impactful to the economy. 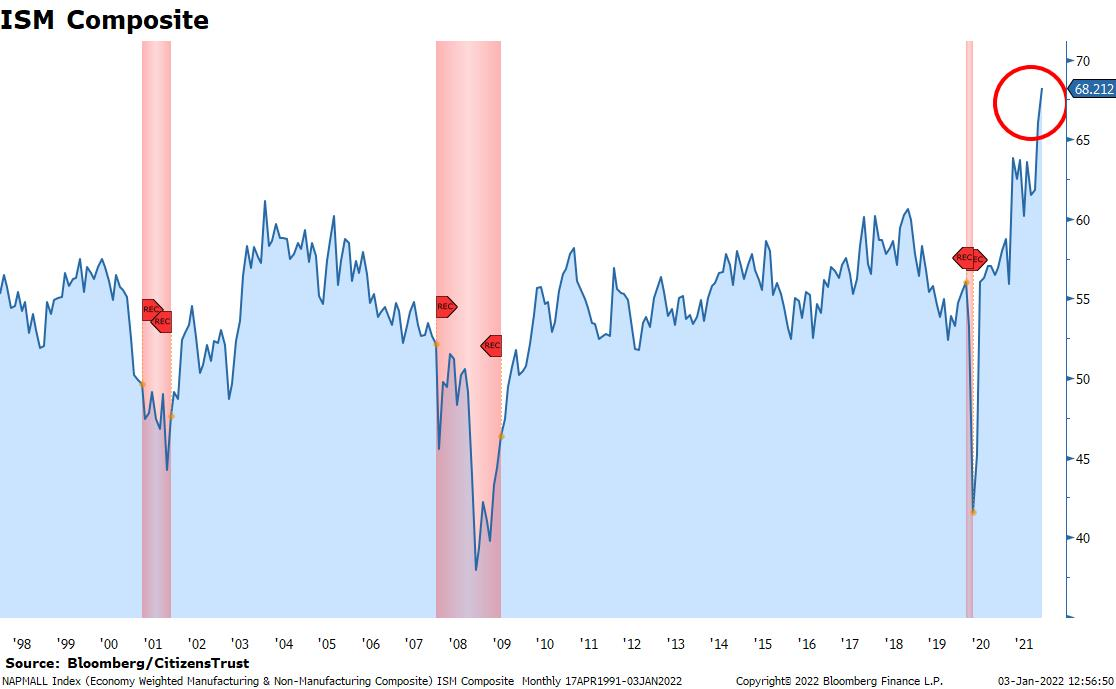 The ISM Composite, which combines both the ISM Manufacturing and ISM Services indices, has set another record at year end, this time driven by the Services component. The demand for Services is at the highest levels in over 30 years and it will take several months, if not quarters, to work down back logs. On the manufacturing side, supply chain issues persist and are expected to take at least a year to recede. The above combination bodes well for economic growth over the next few quarters.

Our suspicion is that 2022 will feel a lot closer to “normal” at the end of the year than it does now. A hopefully waning and “less virulent” virus should clear the way for a variety of markets to be interfered with less. In addition to plenty of demand, the labor market is as tight as it has ever been. The difference between the number of job openings and the number of unemployed people remains at record levels. Further gains in employment and all the trickle-down benefits that come from people working is practically inevitable this year.