Good news was abundant during the second quarter of 2021. COVID-19 cases continued to fall to their lowest levels, government imposed restrictions were lifted, and additional stimulus support hit the economy right as it was opening back up. 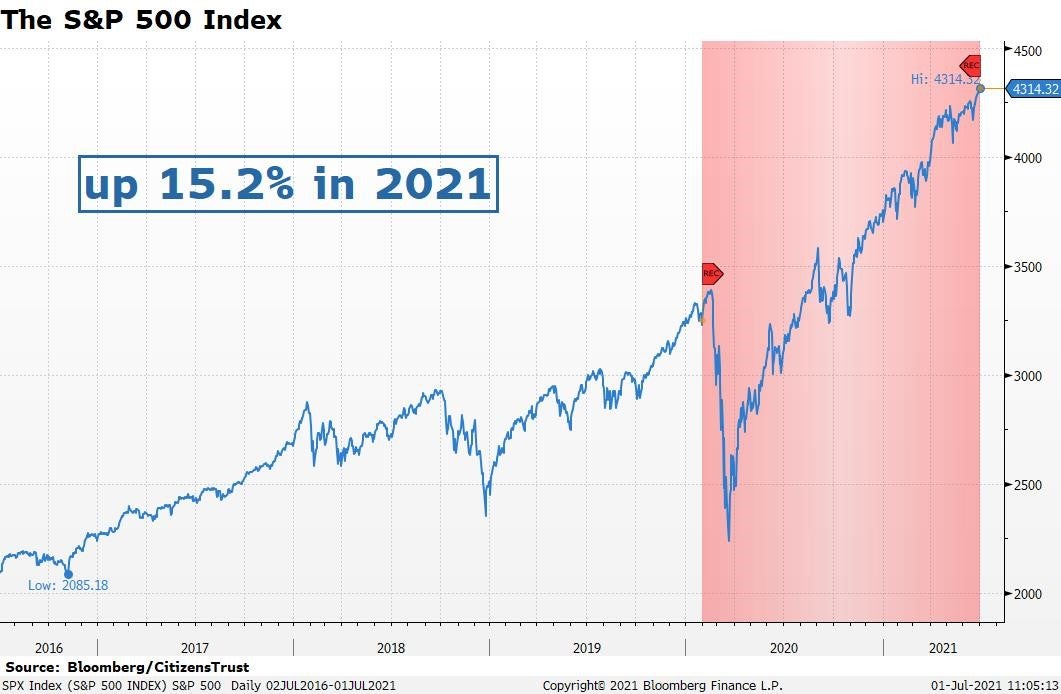 The faster-than-expected economic recovery set the stage for U.S. stock indices to finish the quarter at record levels. The S&P 500 rose for the fifth quarter in a row, posting a gain of 8.5%. The year-to-date return for the S&P 500 is now at 15.2%, marking the best first half start to a year in over 20 years. Energy has been the best-performing sector in the S&P 500 this year gaining over 45% as oil prices have risen back to levels not seen since 2018.

Outside the U.S., International Developed markets, as measured by the EFA ETF, were up 5.4% during the first quarter and are up 9.6% YTD. Emerging markets, as measured by the EEM ETF, were up 3.8% for the quarter and 7.2% YTD. Both International indices continued to lag the U.S. as many international economies are recovering at a slower pace. Globally, the MSCI World Index rose 7.1% in the first quarter, and have gained 12.3% for the year. 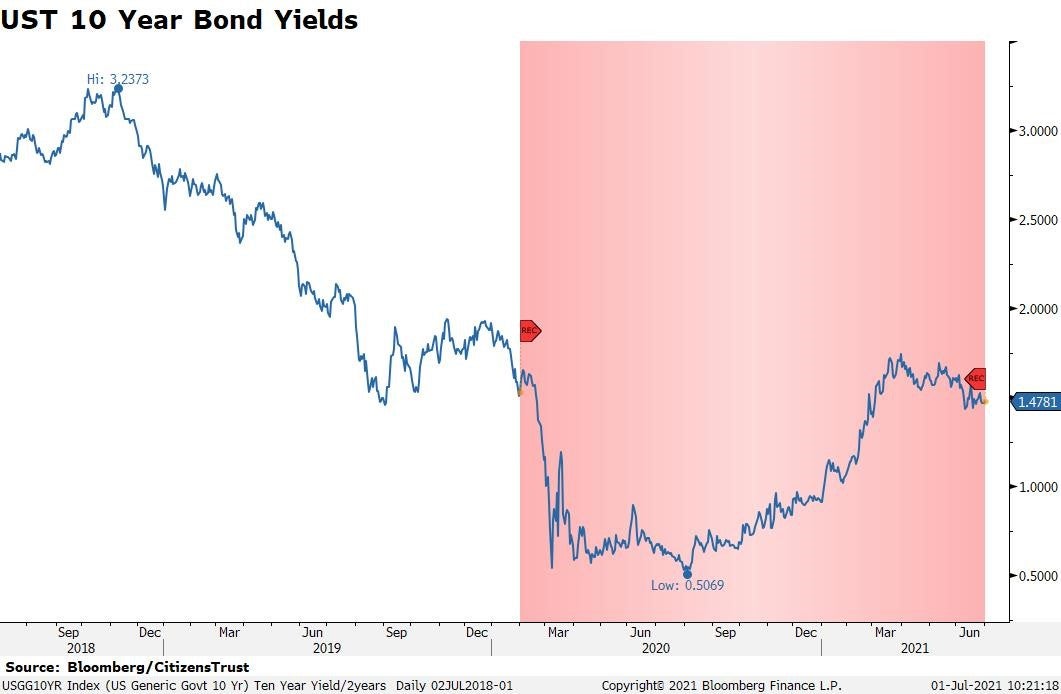 It is difficult to separate any meaningful signal from noise in the fixed income markets with the Federal Reserve purchasing bonds at a massive pace. The Fed stepped into the market in March of last year in order to calm a market that was panicking over the pandemic and looming economic shutdown. The Fed formalized the program in June of 2020 with monthly purchases of $80 billion in U.S. treasuries and $40 billion in mortgage backed securities. Fed chairman Jerome Powell originally stated that the program would continue until the economy fully recovered and returned to previous full employment levels. 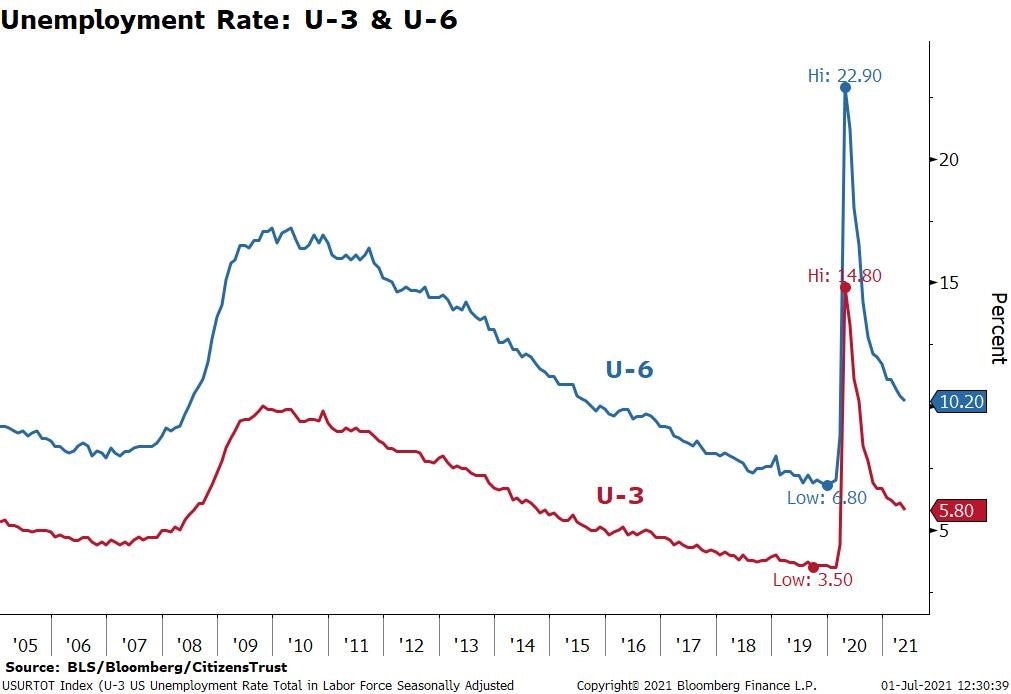 The labor market has yet to fully recover, but stronger-than-expected economic growth has the Fed dropping hints that they may begin to at least discuss slowing the pace of bond purchases later this year. This so-called tapering process, and the timing of its implementation, will continue to be a primary focal point for interest rate markets for the rest of the year.

The Federal Reserve has made no policy changes this year and continues to state that it has no intention of raising rates any time soon. That leaves short-term rates near zero while longer term rates have gone up in anticipation of a strong recovery and normalizing labor market in the coming months. Bond market performance has reflected the rise in rates this year with the Barclays Aggregate Index falling 1.6% YTD.

Prospects for economic growth in the U.S. have been increasing at a pace rarely seen before. Economic projections in January were for U.S. GDP growth of 3.1%. Those estimates from the International Monetary Fund have more than doubled to 6.4% today. This would be the fastest rate of growth since 1984. As the economic shutdown lengthened last year, many economist predicted it would take several years to return to pre-pandemic levels of economic output. The U.S. may now get back to those levels by the end of this year. The rise in activity and rapid return to growth has translated to record levels of profitability for U.S. companies overall. The recovery in S&P 500 operating margins is truly remarkable. 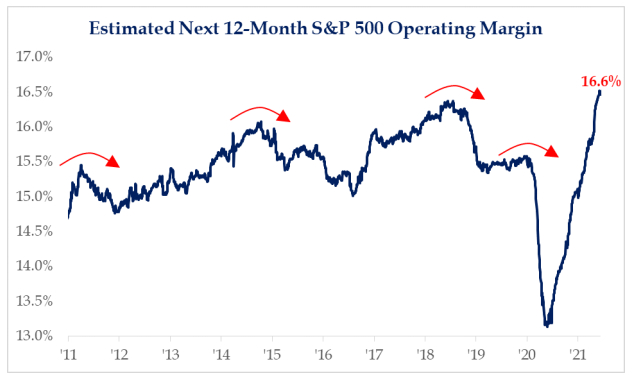 Strong economic growth, supply chain disruptions, and a stubborn labor market have made inflation the hot topic and it will likely remain so for the foreseeable future. Milton Friedman often said, “Inflation is the cruelest tax” referring to how it disproportionately hits the lower income segment of the population and folks on a fixed income the hardest. The recent May reading for Core Personal Consumption Expenditures (PCE) was a lofty 3.4% year-over-year, the highest level in decades. 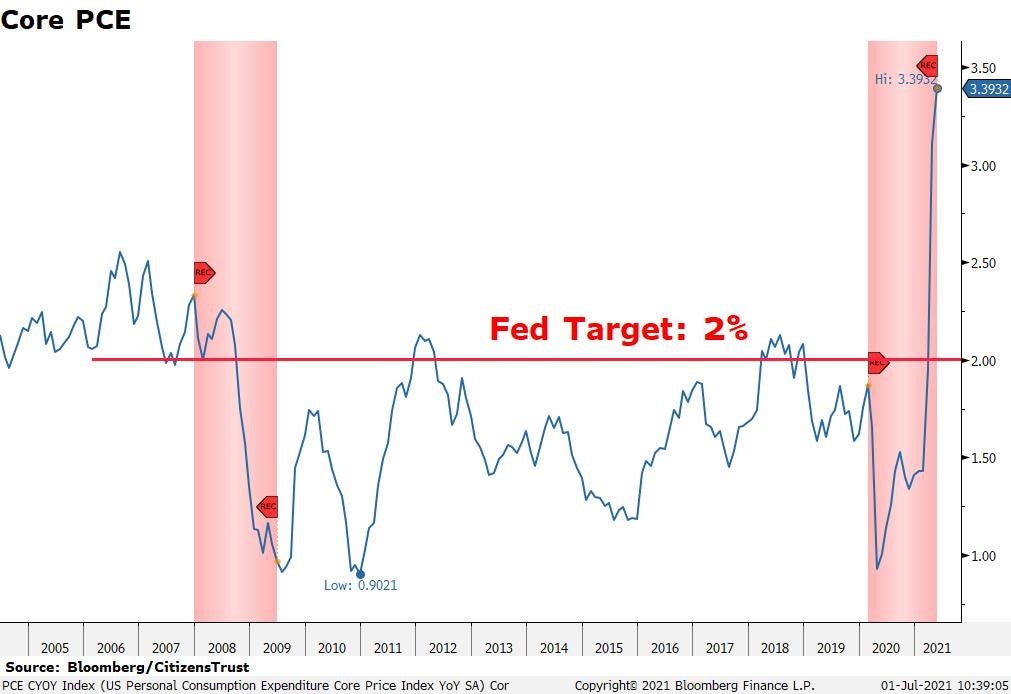 The Fed has acknowledged higher inflation readings and considers them transitory at this point. They are willing to let inflation run above their stated target for “some time” and get the long-term average inflation rate up to two percent. The debate over whether these price increases are truly transitory or are foretelling of a multi-year inflationary period will go on well into next year. Until the labor market normalizes and supply chain disruptions are resolved, the inflation outlook will remain uncertain.

Fiscal policy and pent-up demand should propel economic growth well above baseline levels well into 2022. Another infrastructure and social policy bill is being debated in Congress this summer and it could add to the already enormous government spending programs that have been implemented in response to COVID-19. There is pent-up demand from the U.S. consumer, who is flush with cash and ready to do what they do best: spend. As supply constraints are resolved, consumer spending and retail sales should remain robust.