The third quarter was a mixed bag for financial markets. Bonds sold off late in the quarter as higher inflation readings drove interest rates higher. The S&P 500 managed a slight gain for the quarter after declining in September and broader equity indices declined slightly. 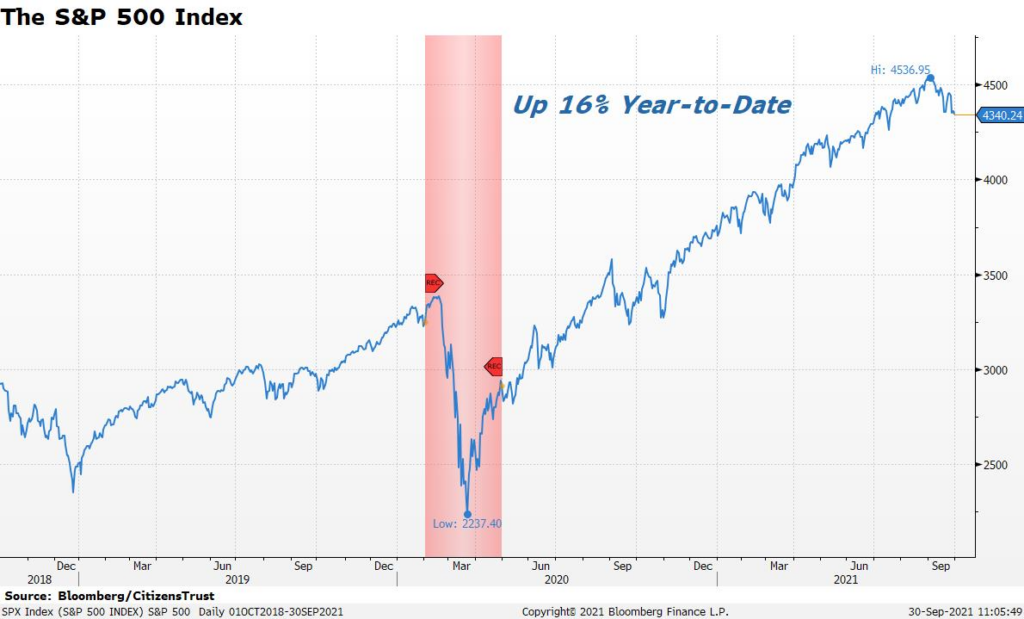 After hitting record highs in the quarter, U.S. stock indices pulled back after the record economic recovery appeared to be constrained. The S&P 500 still managed to post a gain of 1.0% for the third quarter after selling off in September. The year-to-date return for the S&P 500 is now at 16.4%.

Outside the U.S., International Developed markets, as measured by the EFA ETF, were down 1.1% during the third quarter and are up 8.4% YTD. Emerging markets, as measured by the EEM ETF, were down 7.8% for the quarter and are now basically flat for the year. Both International indices continued to lag the U.S. as many international economies are recovering at a slower pace. Within emerging markets, Chinese stocks sold off during the quarter as several new policies initiated by the government were viewed as unfriendly to businesses. Globally, the MSCI World Index fell .9% in the third quarter and remain up 11.3% for the year.

After significantly increasing from the pandemic-induced low levels of last summer, interest rates peaked earlier this year near 1.75%. For the last two quarters, the fixed income market has grappled with a smaller-than-expected economic rebound and a resurgence in Covid-19 cases. These events sent rates back below 1.2% early in the third quarter. By the end of September, the spike back to 1.5% on the ten-year treasury bond was driven by the market acknowledging the Fed’s tapering program that will begin within a few months and a new focus on when the Fed will begin to hike rates. Currently, many investors expect rate hikes to begin near the end of 2022. 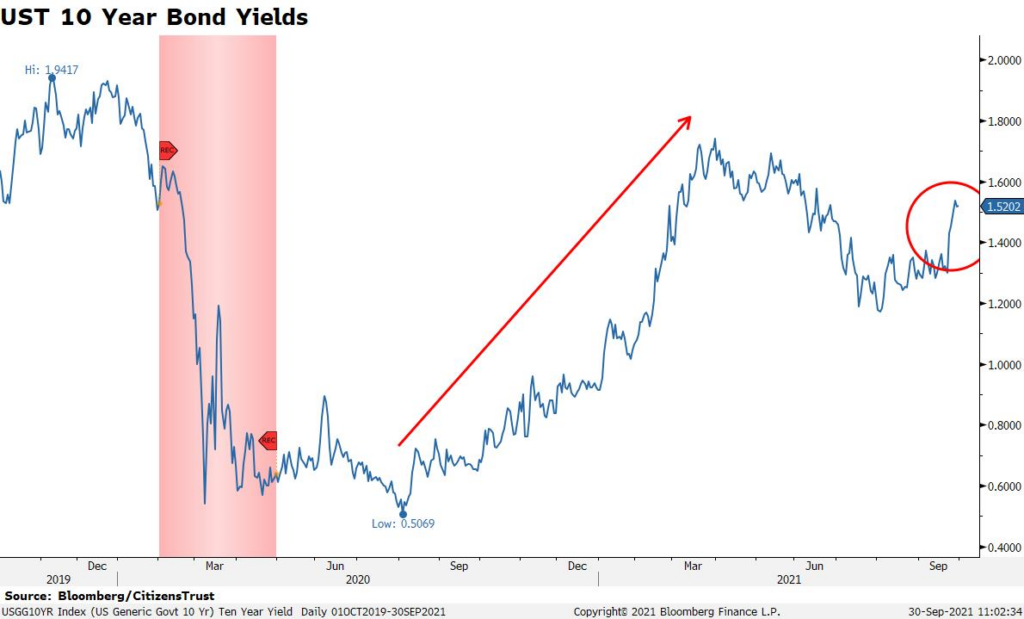 The yield curve also began to steepen late in the third quarter and Investment Grade credit spreads remain at record low levels. Likewise, High Yield credit spreads are very low as well, and High Yield bond issuance is on pace to set a record this year. This is a sign that fixed income investors are confident that any sort of default cycle or credit crisis is a long way off. 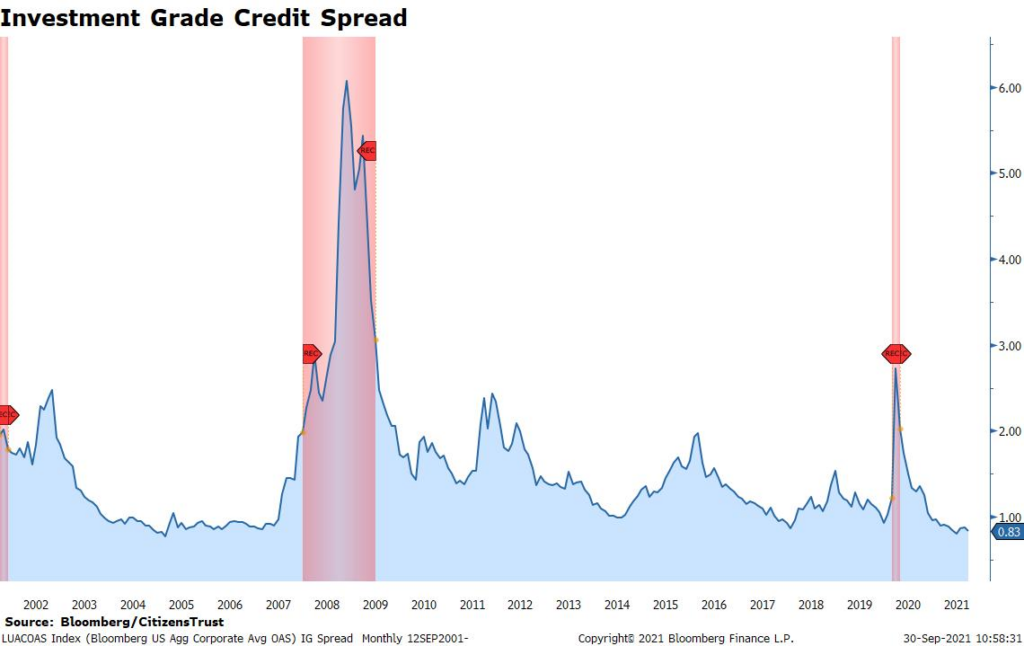 The tapering of Fed bond purchases has been well projected to begin later this year. Short-term rates remain near zero, but both the Two-year and Five-year U.S. Treasury bonds reached post-pandemic highs at the end of the quarter. The market is beginning to expect rate hikes in late 2022. Rising rates put pressure on bond prices and the Bloomberg Barclays Aggregate Index remains in negative territory YTD.

Economic growth in the U.S. remains strong but near-term estimates have been lowered due to supply constraints. The ISM Composite, which combines both the ISM Manufacturing and ISM Services indices remains at elevated long-term levels due to pent-up demand and disrupted supply chains. Supply chain issues facing many companies were originally expected to ease over the summer, yet, they have in fact gotten worse. Backlogs, shipping costs, ordering times, etc. all continue to increase. By now, everyone is likely aware of the congestion at shipping ports. Our local L.A. & Long Beach ports seem to be setting a new record backlog every month. This is the case at all U.S. ports and higher shipping costs do not appear to be acting as a deterrent, just another reason to raise prices. While supply chain dynamics have kept a lid on growth expectations, both revenue and earnings growth at U.S. companies have remained strong. 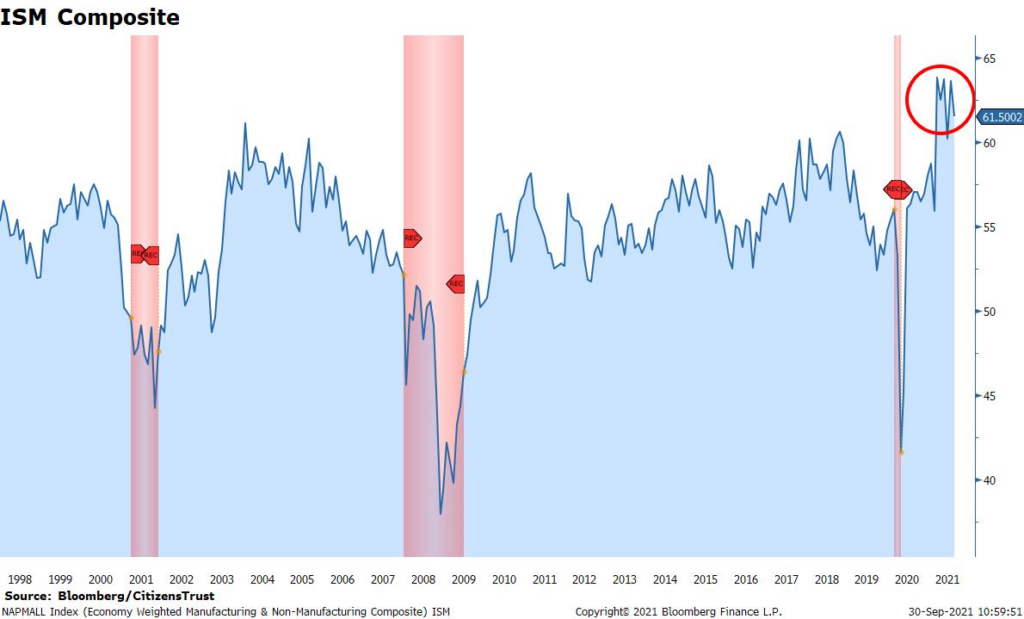 Second quarter earnings for the S&P 500 (reported in the third quarter) were very strong and forward estimates continue to rise. The forward 12-month P/E ratio for the S&P 500 has actually fallen nearly two points since March 31st, despite stock prices rising this year. The good news is that the demand side of the economy still appears to be quite solid.

As we enter the last quarter of 2021, financial markets will be keenly focused on inflation readings. The Fed has long held that the recent spikes in many inflation measures were “transitory” and caused by the re-opening of the economy. Strong demand, supply chain disruptions, and a stubborn labor market continue to impact inflation and these factors do not appear to be subsiding in the near term. During the most recent quarterly earnings reports, inflation was mentioned on 45% of earnings calls according to FactSet, which is well above the average of 27% during the past five years. 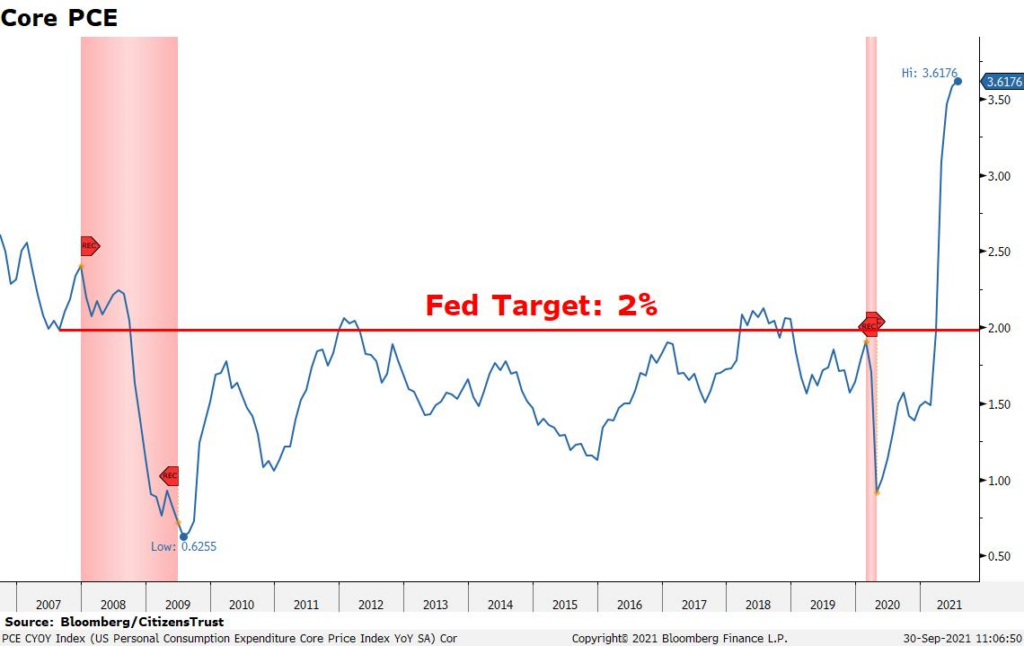 At their most recent meeting, the Fed was forced to raise its projections of its favorite indicator of inflation, the core PCE Price Index, from 3.0% in June to 3.6% currently. Some not-so-transitory inputs have continued to increase. Energy prices are up significantly, housing prices are up 19% year-over-year, and rents are beginning to rise in most major cities. While the Fed has repeated that they are willing to let inflation run above their stated target for “some time”, the pressure to do something about it is likely to increase in the fourth quarter.

In light of many factors running interference with the economy, the end result may be that the recovery simply takes longer. Some companies have stated that the supply chain issues they face may not be resolved until 2023. The recovery in jobs has stalled in recent months but should resume as factors affecting the labor force wind down. Job Openings are at record highs by a wide margin and if those opportunities are filled as inflated government benefits run out, it would support further economic growth in the months ahead, just not at the pace many had expected a few months ago.